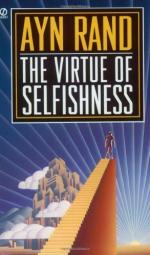 Ayn Rand
This Study Guide consists of approximately 46 pages of chapter summaries, quotes, character analysis, themes, and more - everything you need to sharpen your knowledge of The Virtue of Selfishness.

The Virtue of Selfishness Summary & Study Guide includes comprehensive information and analysis to help you understand the book. This study guide contains the following sections:

This detailed literature summary also contains Topics for Discussion and a Free Quiz on The Virtue of Selfishness by Ayn Rand.

The Virtue of Selfishness is a collection of essays written by Ayn Rand and her associate, psychologist Nathaniel Branden. The essays were separately published between 1962 and 1964 in the monthly publication The Objectivist Newsletter, with the exception of the first chapter of the book, "The Objectivist Ethics", which was published in 1961. In this collection, Rand develops the ethical principles of her philosophy of Objectivism. Rand's complex philosophy embodies all aspects of intellectual life including politics, economics, epistemology, aesthetics, and ethics. Though she does address issues of politics, economics, epistemology, and aesthetics throughout the book, Rand focuses on how these issues apply to the ethical theory of Objectivism.

Rand begins her work with an overall summary of Objectivist ethics and then follows up this discussion with extensive applications of this theory within various issues that arise in society. In its most basic form, Rand's ethical theory is the development of a code of specific values that should guide people's choices and actions. This is the purpose of every ethical theory. The specific values that Rand promotes are reason and self-interest. In every chapter that she has written, Rand defines and redefines the terms she uses as they apply to her theory. These include values, reason, selfishness, selflessness, sacrifice, individualism, collectivism, and rights.

Rand's theory is really fairly simple: one should only live one's life as an individual, and one should only take actions and make decisions by using one's natural ability to think rationally. Therefore, people must only act according to their own individual interests, not those of others or those of a group, as their interests are what will benefit their own lives. However, these interests must be based on principles derived from the reason of their own minds, which is founded on their intelligence, growth, and understanding of reality. This theory is based on the idea that every human possesses the natural right to her own life, and this idea extends to social existence. Even when a person lives in a society, which Rand believes is optimal for human survival, his purpose for living should still be for himself and not for others. Rand's theory contradicts social ethical theories such as communism, which decree that a person's purpose for living is to benefit the lives of all people. Her theory also contradicts religious ethical theories, which decree that a person's purpose for living is for a supreme being—one god or many gods—depending on which religion is discussed.

The question that most often arises in response to Rand's theory of ethics is: How can one solely act on one's own self-interests when one must coexist with others in a society? This entire book functions as an answer to this question. Rand explicates her code of ethics by asserting how an individual should act in a society, how a collective group should conduct itself, and how individuals should conduct themselves ethically in the event of emergencies. She introduces her idea of rights: how rights only apply to individuals and not to collectives, and how individuals must construct governments that protect their rights. She expounds upon the nature of government and ethical methods of government financing. She discusses racism—its nature and origin—and how individuals and societies must deal with racist issues. She describes the destructive nature of societies that violate individuals' rights and how an individual must combat this destruction. Each situation and idea Rand addresses relates to the basic principles of her philosophy.

Branden, the author of five of the essays in this collection, promotes and expands upon Rand's Objectivism but applies her ethical theory to psychology; specifically, the principle of self-esteem. He also emphasizes reason and individualism in his writing and helps Rand explain her theory and ultimately answer the puzzling question formerly addressed.

The Virtue of Selfishness from BookRags. (c)2022 BookRags, Inc. All rights reserved.