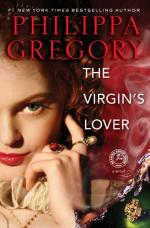 Philippa Gregory
This Study Guide consists of approximately 41 pages of chapter summaries, quotes, character analysis, themes, and more - everything you need to sharpen your knowledge of The Virgin's Lover.

This detailed literature summary also contains Topics for Discussion on The Virgin's Lover by Philippa Gregory.

In The Virgin's Lover by Philippa Gregory, we are transported to the sixteenth century in Tudor England, at the time of Elizabeth the First. This is a time of deep uncertainty because Elizabeth's and old Queen Mary's father was Henry the Eighth, the English King who broke from the Roman Catholic Church of Rome, dreamed of a United Kingdom of Britain, and himself took many wives (muddling the line of succession). What characterized those years was religious persecution as one monarch swung towards Protestantism and yet another back to the Catholic faith, or civil wars as one child of one of Henry's wives was supported for the throne of England over another.

At the time of the start of the book we see Amy Dudley (previously Amy Robsart) trying to convince her disgraced husband Robert Dudley, to accept his defeat and to build a quiet life in the country with her rather than try to attain place and favor at court. Robert Dudley's whole family was disgraced when his parents tried to rebel against Queen Mary (now known as Bloody Mary), and was trying to earn a name for himself in battle and in charm by attending the courts. As a passionate Protestant, he awaiting the day that Queen Mary would die and the natural successor would be Queen Elizabeth, one of Henry's children.

When Queen Elizabeth finally attains the throne, at first Robert becomes her Master of Horse and Master of Revels (a position where he was in charge of all the ceremonies and outings of the young princess). He steadily uses this position to dazzle and delight the young Elizabeth so she starts to fall in love with him, all the while neglecting his wife Amy in the process.

Meanwhile, as rumors start to fly that he is having an affair with the Queen, England is faced with war as France tries to occupy Scotland, and Elizabeth is so shocked that she seems incapable of deciding anything. She turns to Robert to guide her, and he assumes an effective control over her heart and throne, much to the alarm of William Cecil her Secretary of State.

Amidst assassination attempts, a devalued currency, and the increasing scorn of the other European countries as Elizabeth refuses to consider any other hand for marriage, Robert and Elizabeth are secretly engaged, forcing William Cecil to confront the Queen and take action to halt this madness.

More summaries and resources for teaching or studying The Virgin's Lover.