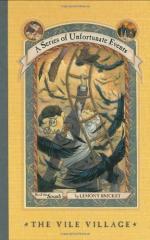 Lemony Snicket
This Study Guide consists of approximately 34 pages of chapter summaries, quotes, character analysis, themes, and more - everything you need to sharpen your knowledge of The Vile Village.

This detailed literature summary also contains Topics for Discussion on The Vile Village by Lemony Snicket.

The Vile Village is the seventh installment in the thirteen-part Series of Unfortunate Events, following the three Baudelaire children as they search for their missing friends in their new home, the Village of Fowl Devotees.

At the opening of the novel, the three Baudelaire children, Violet, Klaus, and Sunny, sit in their lawyer's office waiting to hear their fate. They have recently escaped the clutches of their evil uncle, Count Olaf, and are searching for a new guardian. Since there are no longer any relatives willing to take the three children in and risk Count Olaf's wrath, the children's lawyer has decided to follow the aphorism, "It takes a village to raise a child," and place the Baudelaires in the custody of an entire community. The Baudelaire children know that the V.F.D. is somehow related to the whereabouts of their missing friends, the Quagmire triplets, and do not argue when they hear they will be sent there. They hope that in addition to staying safe from their evil uncle, they will uncover the whereabouts of their friends.

As soon as the children arrive in the V.F.D., they see that it will not be a nurturing environment. The entire village is covered in crows: crows in the trees, atop every building, covering the streets. In addition, the community is run by a set of ridiculous and strict rules that govern all behavior, from when people are allowed to speak, to what machines can be used (none). In exchange for food and housing, the children are expected to do all the villagers' chores: making beds, mowing lawns, polishing doorknobs, and making ice cream sundaes. They work from sun up to sun down without complaint, and yet the villagers are still not satisfied. The only bright spot in the Baudelaire children's day is their evenings with Hector, the handyman who houses them. Although Hector is terrified of the Council of Elders and goes mute with fear around them, he silently protests their strict control by secretly collecting forbidden books and mechanical items. As the children work each day, they struggle to figure out where Count Olaf could be hiding the Quagmire triplets. Periodically, mysterious couplets written by Isabella Quagmire appear outside Hector's home, giving the Baudelaires further clues as to the triplets' hidden whereabouts.

One afternoon, the Baudelaires are given the startling news that Count Olaf has been arrested outside the V.F.D. They are overjoyed, believing that their miserable lives hiding from Olaf's evil clutches is finally over. At Olaf's trial, however, the Baudelaires are devastated to realize that the man being held in the village jail is not Count Olaf at all, but a look-alike. Despite the innocent man's pleas, the Council of Elders sentences him to death. He is to be burned at the stake the next morning. When the Council arrives to burn the man, Jacques, at the stake the next morning, they find that he is already dead, and they must hire an out-of-town detective to solve the mystery: who killed Jacques? The flashy detective who arrives on the scene is none other than Count Olaf in a ridiculous costume. Although the Baudelaires try to tell the Council the truth, the adults refuse to listen to the children. Count Olaf, in his detective disguise, announces that the Baudelaire children killed Jacques and that they, too, must be burned at the stake.

As Count Olaf drags the children to the village jail, he reveals his secret plan: two of the Baudelaire children will be killed the next morning as planned. The third, however, will be forced to live out their lives with Olaf, ensuring that he has constant access to the Baudelaire inheritance. The children are horrified and know that they must band together to escape from jail. Using their ingenuity, the children use bread and water to weaken the mortar of the jail cell's brick walls, and their wooden table as a battering ram to bust through their cell. As they work, the children also solve the mystery of the couplet clues. When they read the short poems together, they realize that Count Olaf is holding the Quagmire triplets inside the village water fountain. They run from the jail cell to the Fountain and break it open, rescuing their friends. The five children sprint to the safest place in town, Hector's house, but are stopped along the way by an angry mob still hoping to burn them at the stake.

The Quagmire children manage to escape in Hector's hot air balloon, but the Baudelaire children are not so lucky. They watch with desperation as their best friends in the world float away to safety. When the angry mob descends on the Baudelaires, they manage to reveal Count Olaf's true identity before he escapes. The Baudelaire children know they can stay in the V.F.D. no longer. They walk away from the village with a great sadness in their hearts. Their series of unfortunate events continues.

More summaries and resources for teaching or studying The Vile Village.