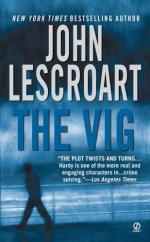 Get The Vig from Amazon.com
View the Study Pack
Study Guide
Order our The Vig Study Guide

John Lescroart
This Study Guide consists of approximately 28 pages of chapter summaries, quotes, character analysis, themes, and more - everything you need to sharpen your knowledge of The Vig.

The Vig Summary & Study Guide includes comprehensive information and analysis to help you understand the book. This study guide contains the following sections:

This detailed literature summary also contains Topics for Discussion on The Vig by John Lescroart.

The Vig is the second novel by John Lescroart that features former district attorney Dismas Hardy. In this novel, Hardy is working as a bartender at the Little Shamrock when his former office mate, Rusty Ingraham walks in. It seems that a criminal who threatened to kill them both is scheduled for release from a federal prison. Ingraham is concerned and sets up a calling schedule with Hardy, but misses the first scheduled call. Hardy goes to his barge and finds a bloody crime scene, convincing him that the ex-con has stayed true to his threats. The Vig is a suspenseful novel filled with twists and turns that will keep the reader guessing until the final page.

Dismas Hardy is tending bar at the Little Shamrock. This is a bar that he earned a quarter percent stake in when he solved the mystery of the murder of his partner's brother-in-law. The previous case has left Hardy with a new outlook on life and a sense of purpose that had been missing since his son's death nine years before. This sense of purpose is put to the test when Rusty Ingraham, Hardy's office mate from his days in the district attorney's office, makes a surprise visit to the Little Shamrock. Louis Baker, a hardened criminal that Ingraham and Hardy put away nine years ago has just been released from federal prison. Ingraham is frightened because Baker promised to kill both him and Hardy upon his release.

Hardy advices Ingraham on the type of gun he should purchase for protection and then agrees to a schedule of phone calls between the two of them. However, when Ingraham does not call at the appointed time that night, Hardy becomes concerned. Hardy goes to Ingraham's barge and finds a bloody crime scene and a murdered woman. Hardy's friend, Abe Glitsky, arrives to investigate the scene. Hardy tries to convince him that Ingraham is dead despite the fact that there is no body, and that Baker killed him. Glitsky, however, does not see a connection between this crime scene and Baker, so he decides to follow his instincts and investigate the woman's soon to be ex-husband instead.

Hardy lives in fear for several days, hiding out at Frannie's, his partner's little sister. At the same time, Baker finds himself in the middle of a turf war with the young drug dealer who has staked out his side yard as his personal territory. Baker wants to clean up his home and make it a safe haven after his time in prison, but Dido, the drug dealer, feels threatened by Baker. They have a confrontation that ends with Baker humiliating Dido with a single hit. Later that night Dido breaks a window in Baker's house. Dido is shot and killed a few minutes later, leaving everyone believing Baker did it, especially when Baker runs.

Baker steals a gun and goes in search of Hardy. Baker breaks into the home Hardy once shared with his ex-wife, discovering Hardy's new address in Jane's phone book. Unfortunately, the police are waiting for Baker as he leaves the house. Baker opens fire and the police fire back, severely injuring Baker. Baker is placed under arrested and admitted to a local hospital under constant guard, bringing Hardy some relief at the idea that his life is no longer in danger.

Hardy goes to see Baker and discovers that Baker knew nothing about the woman killed on Ingraham's barge. This catches Hardy off guard and encourages him to begin looking closer at Ingraham's disappearance. Hardy visits an ex-cop who had a grudge against Ingraham because of a charge of police brutality and murder. At the same time, Glitsky focuses on Johnny LaGuardia, an enforcer for a local mobster. Glitsky learns that Ingraham had a gambling habit that left him deep in debt with the mobster, therefore LaGuardia had been coming to him weekly to collect the vig, or interest, on the debt.

Hardy and Glitsky compare notes and begin to wonder if Ingraham might not have faked his death in order to avoid paying the vig. As they consider this, LaGuardia is found dead, shot in the head twice. A day later, the ex-cop is also found dead. Glitsky thinks this ends the case, but Hardy continues to be convinced that Ingraham is alive. After hearing that Ingraham had intended to move to Acapulco with the young woman found dead on his barge, he decides to go there to search for him.

Hardy drives to Acapulco, but realizes right away that it may be near impossible to find Ingraham in the crowded city without some help. However, Hardy knows what car Ingraham is more than likely driving and finally finds the car in the parking lot of a jai alai stadium. Hardy pretends that he came to Mexico the night Ingraham failed to call out of fear for his life. He and Ingraham spend the evening together along with a young tourist Ingraham picked up. However, while alone with Ingraham, Hardy is thrown off a cliff, barely surviving the enormous drop into the ocean.

Hardy returns to his hotel room, injured but mobile, and calls Glitsky. After Glitsky promises to come to Mexico, Hardy tracks down Ingraham and forces him to go with him back to his hotel. Hardy ties Ingraham up and waits for Glitsky. When Glitsky comes, Hardy discusses with him the dilemma of what to do with Ingraham. Glitsky cannot arrest Ingraham because there is no warrant for him in the United States. However, they can have the local police arrest him. This is what they plan to do. However, Ingraham attempts to get Hardy in trouble by telling the police he has an illegal gun. Fortunately, Hardy saw this coming and got rid of the gun. Ingraham runs, causing the local police to shoot and kill him. Afterward, Hardy returns to San Francisco and asks Frannie to marry him.

More summaries and resources for teaching or studying The Vig.

The Vig from BookRags. (c)2022 BookRags, Inc. All rights reserved.