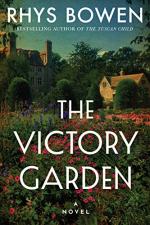 Rhys Bowen
This Study Guide consists of approximately 46 pages of chapter summaries, quotes, character analysis, themes, and more - everything you need to sharpen your knowledge of The Victory Garden.

This detailed literature summary also contains Quotes and a Free Quiz on The Victory Garden by Rhys Bowen.

The following version of this book was used to create this study guide: Bowen, Rhys. The Victory Garden. Seattle: Lake Union Publishing, 2019.

Rhys Bowen’s The Victory Garden opens in 1918 in the English countryside, where Emily Bryce is eagerly awaiting her 21st birthday so that she will be of the legal age of independence. She yearns to leave the clutches of her strict parents, snobbish society, and the grief of her brother’s death. She wishes to follow in the footsteps of her best friend Clarissa, who is a nurse in France, and volunteer for the war effort and do something meaningful with her life. In the meantime, she meets a handsome young Australian pilot named Robbie Kerr who is healing from an injury at the neighboring convalescent home and quickly they quickly fall in love. Her mother deems him entirely unsuitable, being of a different class and not well-versed in the rules of the polite English etiquette that they hold so highly, and forbids her from seeing him and has him transferred to another hospital in Plymouth.

But after Emily turns 21 years old, she heads to the volunteer headquarters and tries to sign up to be a nurse at the hospital in Plymouth. But she is told instead that the country is in need of land girls, and so she enlists as a member of the Women’s Land Army, to the horror of her parents. They are shocked because they feel it is a disgrace that a gentlewoman should demean herself to physical labor like a peasant, but Emily is determined to follow through with her decision and sets off to her training, leaving her relationship with her parents in a frosty condition. She finds that she thrives outdoors and quickly develops a sense of comradery amongst the other land girls, particularly Daisy, a shy young domestic servant, and Alice, a spunky woman from London. She enjoys visiting Robbie at the hospital nearby. When he has sufficiently healed from his injuries, he is called back to duty. Before he leaves, they spend a final weekend together. They share meals, tell stories, and site-see in town, and after getting caught in a storm during a boat ride, they take shelter in the cabin. After making love, he proposes, and she agrees to go home to Australia with him after the war.

She returns to the land girls an engaged woman and eagerly awaits the end of the war so that she can be reunited with her fiancé. In the meantime, she is assigned to work the gardens at Lady Charlton’s estate in Devonshire and takes Daisy and Alice with her. They move into a deserted, dingy cottage and settle in. They make the acquaintance of the other village women who are struggling to survive now that all the men have been taken by the war, and over evening chats, the once-haughty Lady Charlton grows fond of Emily. After their assignment is up, the land girls are called back. Emily learns devastating news: Robbie has been killed in action. Her grief escalates into panic as she realizes she is with child, and knowing she cannot turn to her traditional parents, who she is certain would turn her out if they knew of her disgraceful position, she decides to return to Lady Charlton and beg refuge with her. She offers to help with her garden in exchange for her the use of the little cottage. Following Lady Charlton’s advice, she assumes the identity of a war widow in the village, calling herself Mrs Kerr, to avoid the stigma. Daisy joins her and offers her service as a housemaid and Alice offers to help a local woman named Nell Lacey run the local pub.

As Emily settles into life in the cottage once again, she feels at home. She relishes the freedom and opportunity to learn new skills and to fend for herself in her own space. And over time, with the support of her new friends, she heals from her grief. And after discovering a journal written by a mysterious woman named Susan Olgilvy that lived in the cottage before her in 1858, and a recipe book of herbal remedies by Tabitha Ann Wise from 1684, she realizes that she is living on the grounds of an abandoned healing garden. Emily feels incredibly drawn to the stories of these two women and feels a calling to recover the overgrown herb garden, learn how to identify and utilize the plants, transcribes the remedies, and starts experimenting herself. Local villagers start requesting salves and tonics for ailments and in a miraculous turn of events, after the war is declared over and the men return home, bringing a crisis of influenza with them, she saves the entire village from feverish death with a herbal concoction. The village hails Emily as a hero and she is proud of the role she has grown into.

She gives birth to her baby with the kind support of her female friends and the help of Lady Charlton, who looks after her and calls for the doctor. She helps Lady Charlton reconnect with her grandson, Justin Charlton, who they all thought had died in the war, and he and Emily develop a friendship. Soon afterward, she discovers the danger that comes with the role of healer. Like Tabitha, who was executed as a witch in the 17th century, and Susan, who was accused of murdering a local woman with a remedy and sentenced to hang, Emily is blamed for trying to poison Lady Charlton. Police put her under house arrest and accuse her of trying to hurry the elderly woman’s death because she was recently included in her will, and they blame her for manipulating the village under the false pretense of being a war widow.

Emily’s father arrives just on time to defend her, and she realizes that her parents have been worried sick about her ever since she cut off contact and moved to the village. He apologizes for the harsh words he and her mother spoke in the heat of the moment, joyfully meets his new little granddaughter, and welcomes Emily back home if she wishes to return. Happy to be reunited with her family, Emily nevertheless declines and insists that she belongs in the village. Lady Charlton heals and the charges against Emily are dropped. She celebrates the christening of her daughter and names Lady Charlton as her godmother. She discovers that like her, Susan Olgilvy escaped the charges against her and when she asks Lady Charlton what her first name is since she has decided to name her daughter after her, she responds: Susan.

More summaries and resources for teaching or studying The Victory Garden.