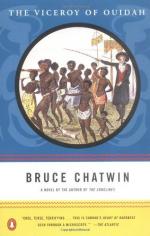 The Viceroy of Ouidah Summary & Study Guide includes comprehensive information and analysis to help you understand the book. This study guide contains the following sections:

This detailed literature summary also contains Topics for Discussion and a Free Quiz on The Viceroy of Ouidah by Bruce Chatwin.

Bruce Chatwin originally intended The Viceroy of Ouidah to be a biography of a Brazilian who became a slave trader in Africa during the nineteenth century. However, afterr his on-site research was disrupted by a coup attempt, he changed the names of the principal figures in the book and used his imagination to fill in the factual gaps. Chatwin, who died of AIDS in 1989, was an adventurous travel writer and novelist. He was known to play fast-and-loose with facts and although this book is sometimes identified as non-fiction, it is a historical novel that depicts the slave trade out of the West African kingdom of Dahomey, now known as Benin, which lies between Togo and Nigeria. The story revolves around a Brazilian whose real name was Francisco Felix de Souza, changed in the book to Francisco Manoel da Silva. It begins in the Dohomean port city of Ouidah, with a family commemoration of Da Silva's death, which had occurred 117 years earlier. Many family members are introduced in rapid succession because Da Silva had fathered sixty-three sons and an unknown number of daughters by the women in his harem or seraglio. He had been befriended by the King of Dahomey, to whom he supplied guns, rum, and finery through Da Silva's shipping trade with England. In turn, Da Silva was made Viceroy of Ouidah, a position that included the sexual favors of the seraglio.

The story covers the entire life of Da Silva, but emphasizes the period from his arrival in Dahomey from Brazil in 1812 at age twenty-seven to his death in Ouidah in 1857. It also deals with the lives of several people around Da Silva, especially his youngest daughter, Eugenia da Silva, who was born to a white woman and lived to a very old age. Other key figures in the book include Taparica the Tambour, who was Da Silva's right-hand man, Da Silva's African wife, Jijibou, and his Brazilian business partner, Joaquim Cutinho. When Da Silva, who came from a poor background, was sent to Dahomey by Cutinho and other rich business associates, they secretly believed that he soon will be killed by the dangerous king. Instead, the king and he become friends and Da Silva's fortune was made. He proved to be an efficient and cold-hearted slave trader, driven by a lust for riches, who even orchestrated slave-taking wars for the king. Da Silva maintained a hope and expectation of returning to Brazil someday but as the years passed and the slave trade became a public embarrassment abroad, his employers gave him no opportunity to leave Dahomey. In Da Silva's old age, after the king had taken everything from him, Da Silva even failed to sneak aboard a trading vessel in disguise. This dark book is full of mysterious rituals, disease, violence, greed, and suffering. Written with compact eloquence and a powerful sense of place, it has a mesmerizing visual style and was adapted as a film titled Cobra Verde by the noted German director, Werner Herzog.