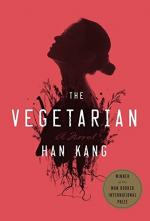 The Vegetarian Summary & Study Guide includes comprehensive information and analysis to help you understand the book. This study guide contains the following sections:

This detailed literature summary also contains Quotes and a Free Quiz on The Vegetarian by Han Kang.

The following version of this book was used for the creation of this study guide: Kang, Han. The Vegetarian. Portobello Books, 2015. Paperback edition. English translation by Deborah Smith, 2015.

This book was originally published in Korean. The novel is divided into three parts, each narrated from the point of view of a different character, all linked by the actions of a central character. Each part is divided into smaller sub-sections of varying lengths. There are no chapters or chapter headings. The structure of the analysis represents places at which the narrative breaks into the aforementioned sub-sections.

Part One is titled “The Vegetarian,” and is narrated from the first person point of view of Mr. Cheong, the traditionalist husband of Yeong-hye, who one day upsets his quiet, orderly life by becoming vegetarian. Mr. Cheong sees this as personally awkward (in that it disrupts his much-valued daily routine) and professionally inconvenient (as his wife’s choices make for awkward social encounters with his colleagues). He also finds her choices upsetting in terms of their life, as a couple, and with her family. For example, at a family dinner party, Yeong-hye's conservative father strikes her. This confrontation has a similarly upsetting impact on Yeong-hye’s sister, In-hye, and on In-hye’s husband (who is never named).

Meanwhile, there are interjections of italic-highlighted narrative throughout this section, written in the first-person voice of Yeong-hye. These narratives describe the dream that seems to have triggered her becoming a vegetarian; her present day experiences with this and other dreams; and also refers back to a traumatic confrontation with her father in her childhood.

Part Two is titled “Mongolian Mark,” and is narrated from the third person point of view of In-hye’s husband, referred to in this analysis as “the artist.” Narration reveals that Mr. Cheong has started divorce proceedings, and Yeong-hye has moved out on her own. Yeong-hye is still a vegetarian. Meanwhile, the artist becomes increasingly obsessed with Yeong-hye, and specifically with a pale birthmark (a Mongolian Mark) on her buttocks. He channels his obsession into his work, first into a series of sketches that portray Yeong-hye and an unknown man covered with flowers and having sex; and then in a pair of video recordings that he gets Yeong-hye to participate in. In the first, the artist records himself covering Yeong-hye’s naked body with paintings of plants and flowers. In the second video, the artist records a fellow artist also having his body painted. The artist’s attempt to recreate the sketches in his book by having his colleague and Yeong-hye have sex ends in failure. More obsessed than ever, the artist has his body painted by yet another colleague, visits Yeong-hye’s home, and records himself having passionate sex with Yeong-hye. The aftermath of their encounter is interrupted by the arrival of In-hye, and a confrontation that ends with Yeong-hye being taken to a psychiatric hospital.

Part Three is headed “Flaming Trees” and alternates present tense narration (describing In-hye’s visit to her sister in hospital) with past tense narration (describing incidents from both the recent and more distant past). All of that narration reveals that Yeong-hye is in a psychiatric hospital for months; that In-hye has separated from her husband (the artist); and that In-hye has come to realize that Yeong-hye has been fighting to live a life of the kind of independence that she (In-hye) has longed for but never had the courage to live.

Narration also reveals Yeong-hye’s belief that she is becoming increasingly tree like. In spite of her beliefs about what should be happening to her sister and the efforts of physicians to force Yeong-hye to consume nourishment, In-hye comes to a place where she feels it necessary to fight for her sister’s right to live, and die, on her own terms. The narrative ends with In-hye riding in an ambulance with Yeong-hye, looking for signs of support, rightness, and truth from the trees that the ambulance is passing.

The Vegetarian from BookRags. (c)2022 BookRags, Inc. All rights reserved.