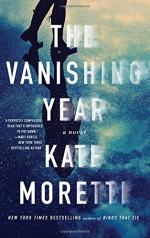 Kate Moretti
This Study Guide consists of approximately 42 pages of chapter summaries, quotes, character analysis, themes, and more - everything you need to sharpen your knowledge of The Vanishing Year.

The Vanishing Year: A Novel Summary & Study Guide includes comprehensive information and analysis to help you understand the book. This study guide contains the following sections:

This detailed literature summary also contains Quotes and a Free Quiz on The Vanishing Year: A Novel by Kate Moretti.

The following version of this book was used to create this study guide: Moretti, Kate. The Vanishing Year. Atria Books/Simon & Schuster. 2016.

The Vanishing Year is a mystery thriller by Kate Moretti in which 29- year-old Zoe Whittaker attempts to confront and escape the dark secrets of her past. Zoe in her current life is the wife of the handsome and rich 40-year-old Wall Street millionaire Henry Whittaker. Henry is the perfect husband: he is constant, steady, supportive, and attentive, though he is haunted by the death of his first wife, Tara. However, Zoe’s past is completely at odds with her present: she was abandoned at birth in the hospital by a teenage mother only to be raised by a loving adoptive mother named Evelyn who got into a bad relationship with a man named Mick. It was only after Evelyn’s death and Zoe’s having dropped out of college that Zoe and Mick reconnected and Mick got Zoe into doing and selling drugs, but when Zoe stumbled upon a sex trafficking ring of underage girls, she went to the police. Zoe was kidnapped and brutally beaten, but was rescued and went east to New York. There, she worked in a flower shop with her friend Lydia until meeting Henry at a dinner party for which he hired the florist.

In the present, Zoe goes out of her way to avoid running into people she knows. In five years, she has only been recognized twice, and she denied her identity each time. While meeting with a reporter friend named Cash, Zoe is nearly run down on the street by a gray car. When her apartment is later broken into and ransacked, Zoe realizes her past must be catching up with her. At the same time, she enlists Cash’s help to track down her birth mother, while Henry grows jealous of the time Zoe is spending with Cash. Arguments and makeup sex become common between Zoe and Henry, though each argument drives them further apart. Cash is successful in tracking down Zoe’s birth mother, whom Zoe goes to meet. Zoe’s birth mother, Caroline, is the cousin of Evelyn, and wants nothing to do with Zoe because Zoe does not fit into her life. Zoe does learn, however, that she had a twin sister named Joan. Zoe then tracks down her sister only to learn from Joan’s adoptive parents that Joan has been dead for three years, having been killed in a hit-and-run in Midtown.

Henry and Zoe decide to go away for the weekend to get away from everything. When Henry is out, Zoe begins to look into Henry’s old records and discovers photos from Henry’s first wedding. Henry’s first wife, she discovers, was Joan – Tara Joan Whittaker, her twin sister. Henry then returns to the house where he overpowers Zoe, ties her up, feeds her sedatives, and rapes her over a period of two weeks. When Henry lets Zoe up to use the bathroom, Zoe bashes his face with a candle and runs to the neighbor’s. The neighbor is Penny, Henry’s family’s longtime help. Penny shoots and kills Henry as Henry goes after Zoe. Zoe learns that Penny’s husband, Frank, is quadriplegic thanks to a fire started by Henry as a child. She also learns that Penny was fired when Penny got too close to the truth of things. It is also learned that Henry blamed Zoe for Tara’s death, killed the killer, and then sought to kill Zoe – but he decided that she owed it to him to become his wife instead replacing Tara. As the novel ends, Zoe is now dating Cash and seeing a therapist. She, Cash, and Lydia travel to Lake Tahoe to spread the ashes of Evelyn.

More summaries and resources for teaching or studying The Vanishing Year: A Novel.

The Vanishing Year: A Novel from BookRags. (c)2022 BookRags, Inc. All rights reserved.