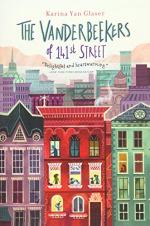 The Vanderbeekers of 141st Street Setting

Karina Yan Glaser
This Study Guide consists of approximately 32 pages of chapter summaries, quotes, character analysis, themes, and more - everything you need to sharpen your knowledge of The Vanderbeekers of 141st Street.

Harlem is the main setting and backdrop of the novel. This is where the children have grown up in their brownstone on 114th Street and also where their father grew up. The neighborhood feels more like a family and they are distressed by the idea of moving anywhere else.

New York City is the larger metropolitan hub that encompasses the Vanderbeeker's story. They venture out into the other boroughs of New York City and utilize the areas outside of Harlem to explore. The city has its own sense of character and adventure because the children are able t have access to a whole world outside of their home.

The brownstone is the most important setting of the novel because the children are preoccupied with how they plan to save their home after Mr. Beiderman does not renew their lease. All of their childhood memories...

More summaries and resources for teaching or studying The Vanderbeekers of 141st Street.

The Vanderbeekers of 141st Street from BookRags. (c)2022 BookRags, Inc. All rights reserved.