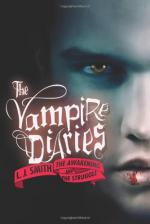 The Vampire Diaries: The Awakening and the Struggle - The Struggle, Chapters 5-6 Summary & Analysis

L. J. Smith
This Study Guide consists of approximately 41 pages of chapter summaries, quotes, character analysis, themes, and more - everything you need to sharpen your knowledge of The Vampire Diaries.

Chapter's Five and Six of The Struggle take the conflict between the two groups of characters to a new level, bringing it out into the open. It starts with an extract from Elena's new diary, since the previous one had been stolen, which explains that Stefan's name is, on the face of things, cleared as the police could not find any fault with him, especially since he was attacked himself and left to die in a similar fashion to the other victims.

During the next day at school, there is a new teacher replacing Mr. Tanner. Alaric K Saltzman, instead of teaching, begins by asking the class to talk about what happened in the previous couple of nights and whether they could share their feelings with the class.

The second person to share is Tyler Smallwood, who...

(read more from the The Struggle, Chapters 5-6 Summary)

More summaries and resources for teaching or studying The Vampire Diaries: The Awakening and the Struggle.

The Vampire Diaries: The Awakening and the Struggle from BookRags. (c)2022 BookRags, Inc. All rights reserved.