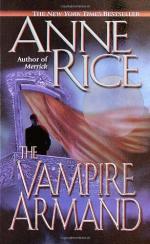 Anne Rice
This Study Guide consists of approximately 33 pages of chapter summaries, quotes, character analysis, themes, and more - everything you need to sharpen your knowledge of The Vampire Armand.

This detailed literature summary also contains Topics for Discussion on The Vampire Armand by Anne Rice.

"The Vampire Armand" is one of the novels in the "The Vampire Chronicle" series by author Anne Rice. The story follows the main character, Armand, who originally made an appearance in the novel "Interview with a Vampire". In this story, Armand takes the reader back to his boyhood, growing up in a poor family in Kiev, an area of Russia.

While trying to deliver one of his paintings into a nest of trees for Pagans to find and help save their souls, Armand is captured by the Tatars. He is enslaved with the Tatars until he is eventually sold into slavery. From his dungeon, Marius buys Armand. Marius is a vampire disguised as a great painter among mortals.

Marius takes Armand back to his palazzo in Venice, where Armand lives amongst the other young boys that Marius has saved from their various ills. Marius takes a special interest in Armand and chooses to turn Armand into a vampire, so that he can live eternally. Armand lives a luxurious life with Marius until a dark and evil sect of the vampires kills Marius and the boys and captures Armand.

Armand goes on to run the vampire coven in Paris. His journey ultimately ends in New Orleans, where he reunites with many of the other vampires. He also tells his story to one of them, while trying to keep his beloved mortal children, Benjamin and Sybelle from transforming into vampires.

More summaries and resources for teaching or studying The Vampire Armand.