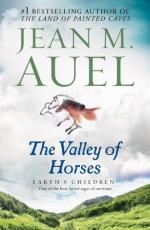 The Valley of Horses Setting & Symbolism

Jean M. Auel
This Study Guide consists of approximately 45 pages of chapter summaries, quotes, character analysis, themes, and more - everything you need to sharpen your knowledge of The Valley of Horses.

Jondalar's people believe the First Mother has the power to create and bring forth life and by honoring women they repay the First Mother for her awesome gifts. The donii is a figurine carved in ivory or limestone to honor the First Mother or Doni. Most donii do not have a face, but the night of Ayla's First Rite of Pleasures Jondalar carves a donii that resembles Ayla, making her promise to never lose it in case it contains some of her spirit.

Ayla believes that everyone has a totem that is represented by a particular animal. Ayla's totem is a cave lion. Whenever a person's totem gives them a sign in the shape of an object, the person takes that symbol and places it in a small pouch they wear around their necks. The Clan people believe that if they lose their amulet, they...

More summaries and resources for teaching or studying The Valley of Horses.

The Valley of Horses from BookRags. (c)2023 BookRags, Inc. All rights reserved.