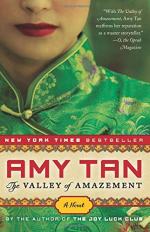 The Valley of Amazement Quotes

Amy Tan
This Study Guide consists of approximately 67 pages of chapter summaries, quotes, character analysis, themes, and more - everything you need to sharpen your knowledge of The Valley of Amazement.

When I was seven, I knew exactly who I was: a thoroughly American girl in race, manners, and speech, whose mother, Lulu Minturn, was the only white woman who owned a first-class courtesan house in Shanghai.
-- Violet (Chapter 1 paragraph 1)

Importance: Although Violet had believed that she was a pure American, her world begins to crumble when she realizes her mother has not told her that she is actually half-Chinese.

Mother had been lying all this time when he was alive. He may have loved me, and by not telling me that he was alive, she had stolen him from me. Now he was truly dead and it was too late.
-- Violet (Chapter 1 paragraph 162)

Importance: Violet is angry because her mother has robbed her of the chance to get to know her father by pretending that he was dead. She must face the feeling of being robbed of her father again when he actually dies.

More summaries and resources for teaching or studying The Valley of Amazement.

The Valley of Amazement from BookRags. (c)2020 BookRags, Inc. All rights reserved.