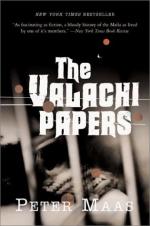 Joseph Valachi is confined in the US penitentiary in Atlanta, GA, for the trafficking of heroin. Valachi murders a fellow inmate there in 1962.

Joseph Valachi is born and raised in Brooklyn. Most of his criminal activity is confined to the area in and around Brooklyn. Valachi turns down an opportunity to become part of Al Capone's Chicago Family because he wants to stay on familiar turf in New York City.

Federal authorities transfer Valachi to Fort Monmouth, New Jersey, for his extensive questioning that will last for months. This location is selected for Valachi's safety—the mob has put a contract out on him.

The Cosa Nostra is an intricate web of criminal activity that is the dominant force of organized crime in America. Membership is strictly confined to those of Italian heritage. Translated literally...