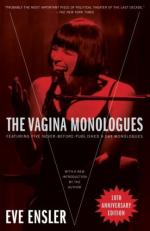 Eve Ensler
This Study Guide consists of approximately 32 pages of chapter summaries, quotes, character analysis, themes, and more - everything you need to sharpen your knowledge of The Vagina Monologues.

"Vagina Fact" A quote from "The Women's Encyclopedia of Myths and Secrets" describes how, during a witch trial in 1593, an investigator noted a woman's clitoris, declared it to be evidence that the woman had an inappropriately extra organ, and then declared the woman to be a witch.

"I was Twelve. My Mother Slapped Me." The author introduces this monologue by describing the "wild collective song" that began to emerge, how the voices began to "bleed into one another", and how she "got lost in the bleeding" as she examined women's experiences around menstruation. The monologue is a series of one or two line quotes from various women on what happened when they had their first menstrual period, many of which comment on the reactions of their mothers and which vary from fear to disgust to (only occasionally) joy.

"The Vagina Workshop" This monologue...

More summaries and resources for teaching or studying The Vagina Monologues.