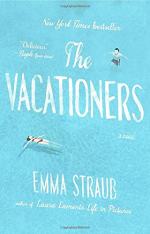 Emma Straub
This Study Guide consists of approximately 44 pages of chapter summaries, quotes, character analysis, themes, and more - everything you need to sharpen your knowledge of The Vacationers.

The Vacationers Summary & Study Guide includes comprehensive information and analysis to help you understand the book. This study guide contains the following sections:

This detailed literature summary also contains Quotes and a Free Quiz on The Vacationers by Emma Straub.

The Vacationers is a novel of family drama.The Post family, Jim, Franny, and 18-year-old Sylvia, ready themselves to fly to Mallorca, Spain for a two-week vacation. In the large rental house they will meet up with their older son, 28-year-old Bobby, his girlfriend Carmen, Franny’s best friend Charles, and Charles’s husband Lawrence. Sylvia is a short time away from leaving home for Brown University and Jim as recently lost his job of thirty years at a local magazine.

They arrive in Mallorca and Sylvia meets the young man her mother has hired as a native Spanish tutor for the two weeks they are on the island. Joan is a very handsome university student of 20, and fits nicely into Sylvia’s goal to lose her virginity before she leaves for Brown. Her last few months of high school were punctuated with social difficulties which she hopes to move beyond.

The rest of the vacationers arrive in the next few days. Charles and Lawrence, married five years, are looking to adopt a baby and waiting anxiously. Bobby is a mostly unsuccessful real estate agent living in Miami, and his girlfriend Carmen, a personal trainer, is thirteen years older. It becomes clear that the rest of the Posts dislike Carmen because she is not New York enough and she is too old. She is barely tolerated.

Moreover, the reader soon finds that Jim was forcibly dismissed from his job at the magazine because he slept with a much, much younger editorial assistant. He confessed his indiscretion to Franny, and Sylvia knows because she lives in the house and hears the arguments, but Bobby has not been told. The vacation seems to be a last stop in Franny’s decision process, during which she must move forward and either leave Jim or forgive him.

The day after they arrive, Lawrence receives an email that a mother in New York has selected them to adopt her baby. The adoption agent suggests they stay on in Spain for the duration of their trip, because she still had time to change her mind and there was plenty of waiting to do. The couple decides to stay. The tension between Jim and Franny is evident; Sylvia suspects he is not sleeping in their room.

Bobby is planning to ask his parents to help him pay off a large debt he incurred while trying to supplement his flagging real estate career. Carmen nags him to ask, but he is hesitant. The tension grows. Lawrence and Carmen hear what happened with Jim at the magazine, but nobody tells Bobby.

Charles tells Franny that he also cheated on Lawrence at the beginning of their relationship, before they were married. Franny never knew and has to consider the fact that her best friend also committed adultery. Meanwhile, she tells him he should confess it to Lawrence, no matter how old the transgression is.

Bobby grows irritated enough with Carmen that he goes to a bar one night without her, but he does take Sylvia, who watches him get drunk and kiss another girl. She is disgusted with her brother and tells him so. Although the author does not specifically say Bobby has sex with the other girl, it is easy to assume he did. The next day he feels sick, but no remorse. Carmen does not ask what happened the night before. Sylvia is completely horrified and feels like everyone around her is betraying her.

That night at dinner, Carmen tells Bobby’s secret to everyone at the table. The next day, the entire group goes to the beach. Franny and Jim hear about Bobby’s indiscretion. Bobby says it is not a big deal, and Franny is grieved that her son would not take cheating seriously. Privately, Jim tells his son that he cheated on his mother and regrets it. Everyone but Carmen is gathering their things and Franny loses her composure, yelling at Jim and Bobby. Jim asks her to calm down, and Charles punches him. Everyone leaves for the house.

Once they return to the house, Carmen tells Bobby she is leaving him. She would have like to stay with him, but he showed so little remorse; in fact, he wished for her to apologize instead. She leaves the house immediately.

The next day, Sylvia’s Spanish tutor takes her for a picnic on the beach for her last lesson, and they have sex. Meanwhile, Franny drives into town to have a lunch interview with a famous Mallorcan tennis player, and Jim follows her out of worry. When she catches him, he apologizes for how he cheated on her and begs her forgiveness.

The next day, Charles and Lawrence get word that the birth mother signed the baby over to them definitively. They leave for New York. The owner of the house, an art dealer named Gemma, returns a day early and acts obnoxiously. Jim and Franny make up. Bobby decides to return to New York with his parents rather than go back to Miami.

More summaries and resources for teaching or studying The Vacationers.

The Vacationers from BookRags. (c)2022 BookRags, Inc. All rights reserved.