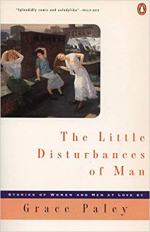 This detailed literature summary also contains Quotes and a Free Quiz on The Used-Boy Raisers by Grace Paley.

The following version of this story was used to create this study guide: Paley, Grace. “Two Short Sad Stories from a Long and Happy Life.” The Little Disturbances of Man. New York: Penguin Books, 1985, p. 125 - 145.

The first story in this series is “The Used-Boy Raisers” (127). It begins with Faith, a single mother, at her house with her two ex-husbands, Livid and Pallid. They all ate some sub-par eggs. Faith recalled Livid and Pallid communicating with each other via letters. Livid told Pallid that Pallid could raise Faith’s sons as if they were Pallid’s own.

Livid and Pallid asked Faith about her current boyfriend, Clifford. They discussed subjects such as his personality and the possibility of marriage. While they spoke, Faith’s children, Tonto and Richard, arrived, and greeted their biological father, Livid by jumping on him. Livid asked them to read for him, and when they left to get their books, Livid admonished Faith for not teaching Tonto how to read properly.

The second story is “A Subject of Childhood” (135). It begins on a Saturday. Clifford was taking a shower while Tonto and Richard drew stickmen. After Clifford finished his shower, he told Richard and Tonto to stop drawing and fight him. During the brawl, Richard and Tonto assumed roles as animals, and the brawl ended with Clifford getting injured.

While he was recovering, Clifford complained that he could not take care of Richard and Tonto, and he told Faith that she was not a good mother. In response, Faith ranted about the fact that she worked hard to raise the children and support herself. Clifford began to gather his items, and Faith threw an ashtray at his ear, causing it to bleed. She then checked on Richard and Tonto, who were now sleeping.

Some time later, Faith offered Richard and Tonto some food. When they refused, Richard went downstairs to play with his friend, Lester. Tonto refused to go with them, and he yelled from the window to irritate Richard while Faith held Tonto so he would not fall. Faith then asked Tonto to play somewhere because she wanted time alone. Tonto refused, stating that he wanted to stay with Faith. Faith continued to plead, but Tonto stubbornly refused. Faith desisted, holding Tonto in her arms.