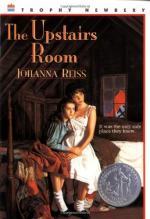 Johanna Reiss
This Study Guide consists of approximately 28 pages of chapter summaries, quotes, character analysis, themes, and more - everything you need to sharpen your knowledge of The Upstairs Room.

This detailed literature summary also contains Topics for Discussion and a Free Quiz on The Upstairs Room by Johanna Reiss.

The Upstairs Room, by Johanna Reiss, is a story told from the view of a Jewish girl, Annie, who is only six years old when Hitler first begins to destroy the Jews. Annie and her family must go into hiding with Gentile families in order to avoid the concentration camps. By the time the war is over many people have lost their lives, but Annie survives to tell her story.

The story begins in the year 1938 as six-year-old Annie is listening to a radio program about the war and what is happening to the Jews because of a man named Hitler. Annie doesn't understand everything that is being said but she knows that her father and many of the other adults in Holland are worried. As the months pass notices soon pop up in Annie's town telling the Jews what they can and cannot do. Soon Annie's father is no longer allowed to conduct business. Annie's mother becomes ill and is admitted to the hospital. More Jews are taken away on trains to Hitler's work camps. Annie's father puts his family into hiding, although they cannot all go together. Annie's older sister stays behind to take care of their mother who is still in the hospital. Annie and her sister Sini are soon sent to live in a town called Usselo with a family named Hannink.

The Hannink family is kind and lets the girls live in the house until they are worried about being discovered by the Germans. Annie and Sini have to go and spend a day in an underground hiding place until Mr. Hannink can move them to a family named the Oostervelds. The Oostervelds, Johan, his wife Dientje, and his mother Opoe, are very kind although they are not as well off as the Hannink family. Soon the family comes to love the girls.

Despite how much they are cared for the girls are not allowed to be seen and Sini and Annie begin to suffer from being locked away. After they are finally liberated by Canadian troops Annie has almost lost the ability to walk. Sini and Annie are happy to be free but don't want to go home and leave the Oosterveld family. Their older sister Rachel comes to take them home and they refuse to leave for a time until Rachel and their father have their home ready. In time the family moves to America.

Years later Annie brings her children back to Holland for a visit and shows them where she hid as a girl. She tries to crawl back into the small space behind the closet but is unable to stop crying.

More summaries and resources for teaching or studying The Upstairs Room.