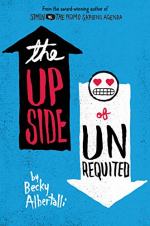 Related Topics
Leah on the Off Beat
What If It's Us
Yes No Maybe So
Love, Creekwood
Kate in Waiting

Becky Albertalli
This Study Guide consists of approximately 51 pages of chapter summaries, quotes, character analysis, themes, and more - everything you need to sharpen your knowledge of The Upside of Unrequited.

The Upside of Unrequited Summary & Study Guide includes comprehensive information and analysis to help you understand the book. This study guide contains the following sections:

This detailed literature summary also contains Quotes and a Free Quiz on The Upside of Unrequited by Becky Albertalli.

The following version of the novel was used to create this study guide: Albertalli, Becky. The Upside of Unrequited. HarperCollins Publishers, April 11, 2017.

In The Upside of Unrequited by Becky Albertalli, life is changing fast for Molly Peskin-Suso. Her mothers are finally getting married, her twin sister has a girlfriend, she has a new job and she is having her twenty-seventh crush on a guy. Molly is ready to have more than just a crush. She wants a real boyfriend, but is afraid of rejection. Along with all this change comes stress but Molly comes to realize that change is a problem that has faced teens since the beginning of time, just like other adapted to change, so will she. Themes in the novel include the negative way overweight people are treated in society and media, the importance of one’s first love, and the impact of social media on families.

Molly is in the bathroom at the 9:30 Club when she sees Mina, the girl whom she believes would be perfect for her sister, Cassie. She has no idea what set of events she sets into action when she points the girl out to Cassie. Cassie comes home with the girl’s cell phone number and soon it is clear that Cassie has fallen hard for Mina.

This is a problem because Molly’s fraternal twin sister who used to tell her everything suddenly turns into a secretive stranger. She pushes Molly to date Will, Mina’s cute hipster best friend, but Molly fears Will’s opinion of her body because she is not thin like the models in magazines and actresses in sexy movies. Molly is overweight and has lived with the fear of other peoples’ opinions and comments about her weight. She has taken medicine for panic attacks ever since boys bullied her in the school cafeteria about her weight.

Meanwhile, Molly has started a new job at Bissel, an artsy gift shop that compliments her personality because she loves crafts and creative design. She works with Reid, the son of the owners of the shop, a boy who does not seem her type at all when she first meets him. As Molly gets to know Reid, she realizes she has more in common with him than she realizes. Soon, Molly is jealous when Olivia, a friend since birth, who seems interested in Will as well.

In the same period, the Supreme Court has finally voted in favor of a bill making same-sex marriages legal nationwide. Molly and Cassie’s moms announce they are getting married. Upsetting to Molly is that Nadine’s sister, Karen, to whom she was once as close as Molly and Cassie, will not come to the wedding because she does not approve of homosexuality. Molly sees the beginning signs that she and Cassie are growing apart and fears their relationship may end the same way.

At the wedding, Molly is surprised and pleased when Karen does attend. She tells Molly she decided it was important for her to be there to support her sister. Molly also attends the wedding with Reid, who is her first ever boyfriend. Nadine explains to Molly she understands her feelings when she was waiting for the right boy to come along because it was the same way Nadine felt when she was trying to get pregnant with Molly’s younger brother Xavier. Nadine explains to Molly that by waiting so long for something, like one’s first love, it makes it even more special when it finally comes.

More summaries and resources for teaching or studying The Upside of Unrequited.

The Upside of Unrequited from BookRags. (c)2022 BookRags, Inc. All rights reserved.