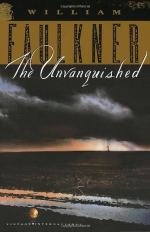 William Faulkner
This Study Guide consists of approximately 28 pages of chapter summaries, quotes, character analysis, themes, and more - everything you need to sharpen your knowledge of The Unvanquished.

The Unvanquished: The Corrected Text Summary & Study Guide includes comprehensive information and analysis to help you understand the book. This study guide contains the following sections:

This detailed literature summary also contains Topics for Discussion and a Free Quiz on The Unvanquished: The Corrected Text by William Faulkner.

Against the backdrop of the Civil War and its aftermath, William Faulkner chooses to address universal issues through the story of Bayard Sartoris, a white boy of privilege who grows up in a South determined to retain its traditions and lifestyle. As a child. Bayard is typically innocent, as he and Ringo, child of slave parents, play war games and look to Rosa Millard, Bayard's grandmother, for nurturing and protection. When the War comes to their own town, however, Bayard receives a significant "dose" of reality, as his home is burned and the household silver taken by Yankees, leaving Granny and Bayard to take up residence in the slave quarters and devise plans for their own survival, while Bayard's father John commands his own Confederate regiment. Attempts to migrate from the devastation and conflict, Granny, Bayard and Ringo eventually travel to Aunt Louvinia's home, only to find it destroyed, along with the railroad which at one time ran behind their property. Life becomes an "adventure" for teenage Bayard, as the threesome outsmart the Union soldiers, stealing mules from one regiment and selling them to another, in order to assist in their own and their neighbors' survival.

As the War is nearing its end and the Yankees leave Mississippi, Granny and local scam artist Ab Snopes devise a scheme to take horses from a small band of outlaws, Grumby's Independents. In the course of their attempt to gain four horses, Granny is murdered, and Bayard and Ringo seek revenge by tracking the band, ultimately killing Grumby and placing his body on Granny's grave. John Sartoris returns from the fighting, and the extended family of Aunt Louvinia, her daughter Drusilla, and Aunt Jenny gather on the Sartoris property, while the home is rebuilt and John becomes involved in local politics, determined that carpet baggers will not gain control of his town. In the course of his efforts, John kills two Northerners on election day, interrupting the wedding that Louvinia has demanded for John and Drusilla. Drusilla had earlier run off from her home and joined John's regiment, fighting alongside the men, and Louvinia is convinced that they must have slept together during that time.

Bayard assists with the reconstruction and then moves to Oxford to study law. John continues in politics and a business venture to build a railroad with partner, Redmond. Unable to resolve their differences, the partnership is dissolved, John emerging the clear "winner," and Redmond is forced to face the continued taunting of John as well as the loss of an election to the state legislature to him. Eventually, Redmond kills John, and Bayard must return home to bury his father and confront the pressure from others to avenge the murder, through a duel with Redmond. As his father had done, Bayard goes to Redmond unarmed, and Redmond refrains from killing him.

The Unvanquished is clearly a novel of the coming of age of a young man, the capacity of humans to endure devastation and violence, and the understanding that, despite the conditions of a vanquished people, there remains within the human spirit the belief that life will move forward toward a better future. Even within the black community, this spirit emerges somewhat, though one is left with the understanding that the "new" south has little to offer the freemen.

More summaries and resources for teaching or studying The Unvanquished: The Corrected Text.

The Unvanquished: The Corrected Text from BookRags. (c)2022 BookRags, Inc. All rights reserved.