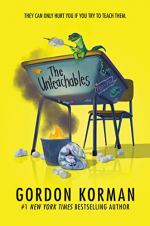 Gordon Korman
This Study Guide consists of approximately 39 pages of chapter summaries, quotes, character analysis, themes, and more - everything you need to sharpen your knowledge of The Unteachables.

The Unteachables Summary & Study Guide includes comprehensive information and analysis to help you understand the book. This study guide contains the following sections:

This detailed literature summary also contains Quotes and a Free Quiz on The Unteachables by Gordon Korman.

The following version of this book was used to create this study guide: Korman, Gordon. The Unteachables. Balzer + Bray, 2019. Kindle.

The novel is told in the first-person present. Each chapter is titled with a number and a character name, and the character in question narrates the entire chapter. There are nine different narrators in the novel. However, the novel sticks to a single narrative thread and chronicles the same, cohesive story throughout so that the plot runs seamlessly no matter who is narrating. In the first chapter, Kiana arrives at Greenwich Middle School. She lives with her mother in California, but her mother booked an acting gig in Utah, so Kiana had to move in with her father, his new wife, and their baby, Chauncey. Kiana hates Greenwich and cannot wait to get back home. When her stepmother drops her off at school without registering her because Chauncey starts throwing up in the backseat, Kiana attempts to sort things out on her own. However, she ends up with a boy named Parker’s schedule, and the secretary thinks it is Kiana’s. She tells her to go to Room 117, where the self-contained special eight grade class is taught. Kiana learns that the kids in Room 117 are referred to as the Unteachables, and decides to join them since she will only be in attendance for a few short weeks and nothing in Greenwich matters to her at all.

Mr. Kermit is a jaded old teacher who is excited to start his final year of teaching before he retires. The superintendent, Dr. Thaddeus, hates Mr. Kermit because he made him look bad over twenty years ago when a student of Mr. Kermit, Jake Terranova, had stolen answers to a National Aptitude Test, a scandal that caught the attention of national media. Jake is now a successful businessman who owns the largest car dealership in the state. Although Mr. Kermit had not done anything wrong, the scandal ruined his desire to teach and caused him and Dr. Thaddeus to develop a decades-long animosity toward one another. In order to force Mr. Kermit to forgo his retirement and quit, Dr. Thaddeus switches his schedule and makes him the Unteachables’ teacher.

Mr. Kermit arrives at Room 117 and sees that his students have lit a fire and are roasting marshmallows on pencils. He puts the fire out with his coffee, then sits down at his desk to do a crossword puzzle. For the next few weeks, he continues this teaching strategy, occasionally passing out worksheets for the students to do, but never intervening or lecturing them about anything.

Kianna gets to know the other students in her class. Aldo has major anger management issues. Parker is a good kid with undiagnosed dyslexia. He works on his parents’ farm and drives his grandmother around, so he has a provisional license and gets to use his father’s truck. Barnstorm is a former star athlete who was injured the previous year and is on crutches. His teachers never pushed him because of his athleticism, so he is very far behind his grade level. Elaine is a very large girl who has a horrible reputation as being evil and violent, but is actually smart and kind. Rahim is an amazing artist, but his dad is in a band and practices all night at home, so Rahim always sleeps during class. Mateo is a nerdy boy who loves Star Wars and comic books.

Mr. Kermit was once engaged to a woman named Fiona. The cheating scandal made him so depressed that he ruined his own relationship. The teacher next door, Ms. Fountain, turns out to be Fiona’s daughter. When Mr. Kermit realizes this, he begins to take a little more interest in his class and his teaching methods.

One day, Barnstorm gets mad because he is not allowed to go with the team to set up for the pep rally. Mr. Kermit gets on the intercom and yells at everyone he can until the coach agrees that Barnstorm can come be with the team. The whole class cheers for Mr. Kermit, who is surprised that they are even listening to him.

Ms. Fountain invites Mr. Kermit and his class to come join her class for circle time. The Unteachables destroy the harmony of her class and unleash her pet lizard, Vladimir. Mr. Kermit finds the lizard the next day and walks into Ms. Fountain’s room to return him, but then he hears Ms. Fountain on the phone with Fiona, telling her what a horrible teacher he is.

Mr. Kermit has a substitute, who they call Dawn of the Dead, or Dawn for short, and the class realizes that they like Mr. Kermit because he always has their back. When they learn that Mr. Kermit hates vuvuzelas, and that Principal Vargas has ordered 1000 for spirit week, the class concocts a plan to steal them and dump them into the river. They get caught halfway through, and Mr. Kermit tries to stop them, but he ends up falling into the river with the vuvuzelas. All the kids jump in after him and try to save him.

The students are all suspended for a week. Mr. Kermit spends his days redecorating his classroom with the help of Ms. Fountain, who urges him to use a positive behavior chart that allows the students to collect rabbit tails to become “goodbunnies.”

Jake Terranova sees an article about Mr. Kermit and the vuvuzela theft. He contacts Ms. Fountain, who he sold a car too, and asks if he can come volunteer with Mr. Kermit’s class. Mr. Kermit is resistant to the idea, but Ms. Fountain insists, and when Jake invites the kids to his dealership they are all excited about the idea.

Over the next few weeks, Mr. Kermit becomes a better teacher, giving tests and actual lectures, and taking the time to plan engaging lessons with exciting material. He takes the kids on multiple field trips to the dealership, where they learn about mechanics and physics.

Meanwhile, Dr. Thaddeus concocts a plan to fire Mr. Kermit if the students do not improve on their science tests based on a loophole in the teacher contracts. Mr. Kermit finds out about the plan and gets his students to improve tremendously. After they take the test, though, the school finds out that Kiara is not really a student. They discount her score and call her stepmother. When Kiara explains everything, her stepmother takes her side and insists that Kiara be kept in the class for the rest of the year.

Mr. Kermit learns that he is being fired because of the science scores. He tries to drive home, but his car breaks down. When the students learn what has happened, they decide to enter the science fair because the winner gets an extra ten points on their test score, and that would enable Mr. Kermit to stay. With the help of Ms. Fountain and Jake, the kids work on their project without Mr. Kermit knowing.

On the day of the science fair, Jake goes to Mr. Kermit’s house and tells him what the kids have done. Mr. Kermit is furious that they all kept the secret for him, but he goes to the science fair and watches in awe as they present his old car, which they have completely remodeled.

The students take second place, which is devastating to all of them. Mr. Kermit calls in a sub and Dawn returns to the class. The students tell her all about what happened to their teacher. She tells her son, who is a newspaper journalist, about the situation, and her son writes an article about the unfair firing or Mr. Kermit. The district is forced to rehire Mr. Kermit. He decides he does not want to retire, but instead wants to teach the Unteachable class forever. Kiara’s mom finishes her movie and invites her to come back and live with her, but Kiara says she wants to stay with the Unteachables, too.

More summaries and resources for teaching or studying The Unteachables.

The Unteachables from BookRags. (c)2022 BookRags, Inc. All rights reserved.