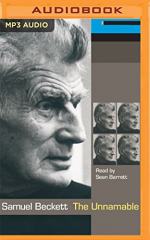 Samuel Beckett
This Study Guide consists of approximately 34 pages of chapter summaries, quotes, character analysis, themes, and more - everything you need to sharpen your knowledge of The Unnamable.

The Unnamable Summary & Study Guide includes comprehensive information and analysis to help you understand the book. This study guide contains the following sections:

This detailed literature summary also contains Quotes and a Free Quiz on The Unnamable by Samuel Beckett.

The following version of this book was used to create this study guide: Beckett, Samuel. Three Novels: Molloy, Malone Dies, and The Unnamable. Translated by Samuel Beckett and Patrick Bowles. Grove Press, 2009.

Published in 1953, The Unnamable is the third and final part of Samuel Beckett’s trilogy, which includes Molloy (1947) and Malone Dies (1951). The most radical of the three, The Unnamable takes the form of a continuous monologue by an unnamed narrator who finds himself in uncertain circumstances, a vast dark space where all he can see are “dim intermittent lights” (287). Though the narrator appears to see characters from Beckett’s prior novels in the trilogy, such as Molloy and Malone, he is ultimately immobile and alone.

The narrator oscillates between trying to comprehend his circumstances and digressing onto other topics. Though he claims he does not know anything, he says he has “innate” knowledge, and concludes that it must have been given to him by “his delegates,” mysterious men whose voices he can hear, but are not actually there with him in the space (291). He says that his stated aim is to speak on himself, but first he has to complete his “pensum,” a written punishment instilled by these “delegates”. (300). He mentions one of them, someone named Basil, but quickly changes his name to Mahood, who tells the narrator stories that the latter relays, as if they happened to him. The first involves the death of the narrator’s family due to sausage poisoning; the second is about the narrator’s existence in a jar, without limbs, placed outside of a chop-house in an unspecified town. A woman, named Marguerite or Madeleine, takes care of the narrator, though mostly because he draws in customers to her restaurant. Eventually, the story ends and the narrator claims that Mahood’s stories have stopped because he can no longer convince him that they are the narrator’s own memories.

The voices persist, but the narrator seems to hear them less and less, and at one point, concludes that his delegates are discussing what to do with him. He begins to describe one of the people whose presence he can sense, Worm, though he never speaks to him. Worm seems to be a fragment of a person; however, once the narrator describes his body, Worm gets “humanized” and the other delegates begin to see him as a person (356). The narrator observes that he is “condemned to talk” (362) by these unknown masters, and does not think it is worth speculating about who exactly is controlling him in this way. Seeing it all as a ruse they have perpetuated to convince the narrator that he exists, he characterizes himself as a “partition,” with the mind on one side and the world on the other (376).

In the last pages of the novel, the voices of Mahood and the delegates disappear, and the narrator is left alone. He wants to speak of himself, but finds that he lacks the language to do so. After telling his own story, about a man who commits suicide after his wife ends up with someone else, the narrator surmises that this story was told to him to make him feel emotions. Longing for silence, though still bound by language, the novel ends with the narrator’s claim that even though he cannot carry on the way he has been, he will.

More summaries and resources for teaching or studying The Unnamable.

The Unnamable from BookRags. (c)2022 BookRags, Inc. All rights reserved.