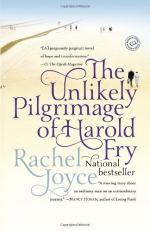 Rachel Joyce
This Study Guide consists of approximately 55 pages of chapter summaries, quotes, character analysis, themes, and more - everything you need to sharpen your knowledge of The Unlikely Pilgrimage of Harold Fry.

This detailed literature summary also contains Quotes and a Free Quiz on The Unlikely Pilgrimage of Harold Fry by Rachel Joyce.

“The Unlikely Pilgrimage of Harold Fry” begins on the day Harold Fry receives a letter from a former colleague, Queenie Hennessy. Queenie is dying of cancer and wanted to say good-bye to Harold. They were not very close when they knew each other, but each had done a kindness that affected the other in an important way. They hadn't seen each other for many years but each remembered the other as being a kind person, worthy of being called “friend.”

Harold is married to Maureen and has only recently retired from the brewery. They have lived their lives mainly in isolation without making any real friends. They never attended the brewery's annual Christmas party and never spent time with other couples. They don't know their neighbors with the exception of a widower named Rex, and they kept him at arm's length. Then Harold receives the letter from Queenie, who is at a hospice in Berwick-upon-Tweed. The letter dredges up memories from years earlier and Harold wants to say something profound to let her know she was important to him. He can't find the words and eventually pens a brief note, then heads off to mail the letter. He quickly passes the first postal box and then passes more options to mail the letter.

He stops at a garage for a snack and the young clerk shows him how to microwave a burger. He tells her briefly about Queenie and the girl talks about her aunt who had cancer. The girl then talks about her faith that her aunt would recover. Harold finds himself thinking about this girl's faith and realizing he has nothing similar in his life. He telephones the hospice where Queenie is living out her final days with a message. He says that he's setting out now to walk to the hospice and that Queenie should hang on until he arrives. He then begins to walk, wearing only the clothes he has on and using the limited items he has in his pocket.

Harold telephones Maureen and she doesn't understand his mission or his reasoning. She initially lies to Rex, saying that Harold is laid up with a twisted ankle. When she admits the truth to him, Rex becomes a friend and confidante, helping Maureen cope with the situation.

As Harold walks, he and Maureen have time to think about their lives and how they came to their current place. Their son David died 20 years earlier. David was an incredibly intelligent young man but could never find his way. He fell into a pit of alcohol and drug use, and then committed suicide. Harold blames himself, thinking that his own childhood left him ill-equipped to be a good father. Maureen blames Harold as well, thinking that he was basically an absent father who had nothing to do with David. Harold's father was an alcoholic and both believe that the genetics of alcoholism played a role in David's death.

As Harold walks, he goes through a range of emotions. He talks to people and learns from their stories. He deals with a large group who join him on his walk and derail him from his original purpose. He struggles with the pain of his mother leaving and his father becoming demented to the point that he didn't recognize Harold. He learns to accept all these things, and to accept David's death.

Maureen also has time to realize that she has blamed Harold for things that weren't his fault. She looks through pictures and sees that Harold is in many photos with David, indicating they spent more time together than Maureen remembered. She begins to open her heart again with the idea that she will change her life with Harold, when he returns to their home.

When Harold reaches Queenie, he's shocked to find that she is near death. Maureen joins him and they are together when they learn that Queenie has died peacefully. When they go to pay their last respects, Maureen and Harold face the loss together, a stark contrast to their attitudes when David died. They then spend time together and begin sharing memories as they prepare to take the next step into a new level of acceptance and happiness.

More summaries and resources for teaching or studying The Unlikely Pilgrimage of Harold Fry.