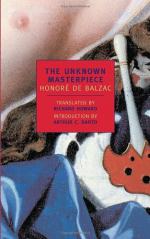 Richard Howard and Honoré de Balzac
This Study Guide consists of approximately 18 pages of chapter summaries, quotes, character analysis, themes, and more - everything you need to sharpen your knowledge of The Unknown Masterpiece.

This detailed literature summary also contains Quotes and a Free Quiz on The Unknown Masterpiece by Richard Howard and Honoré de Balzac .

“The Unknown Masterpiece” is a short story by Honore de Balzac in which young and aspiring artist Nicolas Poussin and established artist Francois Porbus attempt to catch a glimpse of legendary artist Frenhofer’s masterpiece, ten years in the making but seen by no one. When the story begins in 1612, Nicolas is attempting to make his way in Paris as an artist. He is young, full of passion, and is out to conquer the world. He is to meet with and study under the established royal court artist Porbus, but the visit is interrupted by the appearance of the elderly and legendary artist Frenhofer. Frenhofer is a master painter, is rich and is famous, but in old age has, in Porbus’s mind, gone crazy. Frenhofer is as quick to paint as he is to speak philosophically about art.

At Porbus’s studio, Frenhofer criticizes and encourages Porbus’s work, then launches into a philosophical argument about the nature of art, arguing that painting must involve a love of the subject and a love of the craft itself. Art, he argues, is not merely about copying life, but expressing it and finding the beauty and love in it. He then brings Nicolas and Porbus to his own studio, where Nicolas is awestruck by Frenhofer’s work. Frenhofer refuses any requests, however, made by the two artists to see his masterpiece in progress which he has been working on for a decade, never finding it quite finished or quite perfect. Headed home, Nicolas is determined to find a way to see the painting so he decides he will offer his lover and muse, Gillette, as a model for Frenhofer in exchange for a glimpse of the painting. Gillette is young and stunningly beautiful, as well as unfailingly loyal, gentle, and loving. She is hurt that Nicolas would offer her up in such a way, but accepts this out of love for Nicolas.

Nicolas and Porbus confront Frenhofer with this deal. Frenhofer will not allow his masterpiece–which he considers to be the love of his life–to be used in such a trade. Frenhofer does describe his painting–that of a nude young woman on a coverlet, surrounded by curtains and burning incense, yet he will not allow it to be seen. However, when Frenhofer lays eyes on Gillette he is floored by her beauty and inspired, and so he allows the deal to proceed in order to have only a moment with Gillette. Frenhofer finds in her the love of life and the beauty of existence–things which Nicolas does not see in her, or in anything besides himself. Nicolas and Porbus are stunned by the masterpiece itself: it is chaos—full of shapes, colors, lines, and layers, but nothing identifiable save a single, beautifully-rendered foot. Frenhofer sends everyone on their way. That night, he burns all of his paintings and dies.

More summaries and resources for teaching or studying The Unknown Masterpiece.