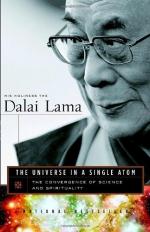 The Universe in a Single Atom: The Convergence of Science and Spirituality Summary & Study Guide

The Universe in a Single Atom: The Convergence of Science and Spirituality Summary & Study Guide Description

The Universe in a Single Atom: The Convergence of Science and Spirituality Summary & Study Guide includes comprehensive information and analysis to help you understand the book. This study guide contains the following sections:

This detailed literature summary also contains Topics for Discussion on The Universe in a Single Atom: The Convergence of Science and Spirituality by Dalai Lama.

"The Universe in a Single Atom" by the Dalai Lama is an exploration of the connection between science and spirituality. The book is based on 40 years of study with great scientific minds, according to the Dalai Lama. In this book, the Dalai Lama addresses the importance of embracing science, understanding that it does not take away from religion.

When the Dalai Lama began his education at the age of six, he studied everything related to Buddhism, but he never had an introduction to the sciences or math. As he explored through the rooms in his winter palace, he came across some items of technology left by the Thirteenth Dalai Lama. These items intrigued him, and he learned how to use them. As he took apart mechanical objects and put them back together, he opened his mind to scientific ideas. In his late teens, he began to travel. During these travels, he met scientists who introduced him to different ways of interpreting the physical world.

Instead of turning him away from religion, he found parallels between scientific methods and religious practices. He realized that both science and religion, when used properly, could help make the world a better place and help people care for each other.

The Dalai Lama was exposed ancient Indian philosophy when he was very young. He had tutors who helped him learn different schools of Buddhist thought. Still, he was more interested in dismantling and reassembling cars and watches than he was in philosophical discussions. This changed when he turned 16 and became the leader of the country. He dedicated himself to his studies at that point.

During his time in exile, the Dalai Lama learned about quantum mechanics. He found the resonance between new physics and the notion of emptiness found in Buddhist studies. Traveling around the world, the man talked with other scientists who had different theories about the beginning of the universe. He compared the Buddhist perspective to other theories. After looking at similarities and differences, he realized the question wasn't really where life came from. Really, it was the origin of sentience that was in question.

Scientists tried to figure out the origins of life and attempted to figure out the concept of consciousness. The Dalai Lama noted that this was a difficult concept because it's based on first person observations, and science used a third-person analysis. He felt that science would benefit from contemplative traditions such as Buddhism. Even though Buddhists weren't necessarily aware of chemical reactions in the brain, the tradition of meditation has shown Buddhists that the mind has a great capacity for transformation and adaptation.

One area of great interest to the Dalai Lama was the role of ethics in genetics. With scientific advancement in genetic engineering of people, animals, and food, making decisions on what is right and what is not right is of critical importance. He felt that it was critical to consider long-term effects of genetic engineering. He also emphasized that science must factor in what's best for mankind and the planet.