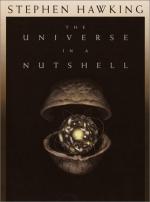 Plot Summary
+Chapters Summary and Analysis
Chapter 1, A Brief History of Relativity
Chapter 2, The Shape of Time
Chapter 3, The Universe in a Nutshell
Chapter 4, Predicting the Future
Chapter 5, Protecting the Past
Chapter 6, Our Future?, Star Trek or Not?
Chapter 7, Brane New World
Free Quiz
Characters
Objects/Places
Themes
Style
Quotes
Topics for Discussion
Order our The Universe in a Nutshell Study Guide

The Universe in a Nutshell Summary & Study Guide

Stephen Hawking
This Study Guide consists of approximately 26 pages of chapter summaries, quotes, character analysis, themes, and more - everything you need to sharpen your knowledge of The Universe in a Nutshell.

The Universe in a Nutshell Summary & Study Guide Description

The Universe in a Nutshell Summary & Study Guide includes comprehensive information and analysis to help you understand the book. This study guide contains the following sections:

This detailed literature summary also contains Topics for Discussion and a Free Quiz on The Universe in a Nutshell by Stephen Hawking.

Stephen Hawking is one of history's great physicists, and until October 1st, 2009 was the Lucasian Professor of Mathematics at the University of Cambridge for thirty years, the same chair held by Isaac Newton. Stephen Hawking is primarily known to the public not only for having a form of ALS that has left him almost completely paralyzed, leaving him able to speak only through an electronic device but that still allows him to write and communicate with others, but also for his brilliance.

Further, Hawking is known for contributing both to the theory of quantum gravity, which attempts to combine quantum mechanics and general relativity and for contributions to the study of black holes. His most popular work is A Brief History of Time, one of the great works of popular science in the twentieth century. It ranked in British best sellers for over four years.

The Universe in a Nutshell is an updated work of popular physics which informs the reader of advances in theoretical physics since his previous writings. Written in 2001, Hawking is able to take the reader through far more sophisticated attempts to unite science's two most successful theories, quantum mechanics and quantum gravity.

The book has seven chapters. The first two are the "trunk" of the book, to use Hawking's words. The rest of the chapters are built off of it. In chapter one, Hawking explains Einstein's two major breakthroughs regarded relativity, the theories of special and general relativity. It also explains how Einstein led to the creation of quantum mechanics. Thus, Einstein laid the foundations for the two most important scientific theories of the twentieth century. In chapter two, Hawking explains general relativity in more detail, which adds an analysis of gravity into special relativity. Einstein's work shows that space and time are one and that together they have a shape. Hawking also suggests ways that the theory can be united with quantum mechanics.

Chapter three, The Universe in a Nutshell, builds on the fundamental tension between these two theories and shows how one attempt to reconcile the two entails that the universe has multiple, simultaneous histories, all of them shaped by a "tiny nut." Chapter four discusses whether physics permits the future to be predicted and how such prediction is threatened by black holes, which absorb the information necessary to make such predictions.

Chapter five discusses whether the laws of physics permit time travel. A sufficiently advanced civilization, he argues, could in principle travel to the past, but it involves making use of probabilities that are infinitesimally small. Chapter six concerns the future of the human race and how advances in genetics and technology will continue at an accelerating rate, making the future radically different from the past and deeply dynamic. Chapter seven is perhaps the most complex, discussing p-brane theory, a proposed theory of quantum gravity. If p-brane theory is true, the present universe and all that is in it may simply be a "hologram".

More summaries and resources for teaching or studying The Universe in a Nutshell.

The Universe in a Nutshell from BookRags. (c)2022 BookRags, Inc. All rights reserved.