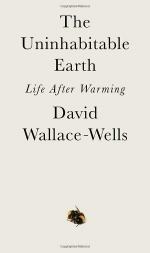 This detailed literature summary also contains Topics for Discussion on The Uninhabitable Earth: Life After Warming by David Wallace-Wells.

The following version of this book was used to create this guide: Wallace-Wells, David. The Uninhabitable Earth: Life After Warming. Tim Duggan Books, 2019.

In the first section of his book examining a potential future devastated by climate change, Wallace-Wells offers an overview of the “cascades” wrought on the planet by increasing global temperatures. He provides a brief history of industrialization and human-produced greenhouse gas emissions, noting that “more than half of the carbon exhaled into the atmosphere by the burning of fossil fuels has been emitted in just the past three decades” (4). He also writes about more recent global efforts to resolve to limit global warming, such as the 1997 Kyoto Protocol and the 2016 Paris Climate Agreement, but notes that these agreements have not done much at all to reduce emissions worldwide. Wallace-Wells also provides a précis of very recent unprecedented natural disasters, such as Hurricane Harvey in Texas and the Camp Fire in California, before setting up the rest of his book as a reckoning with how humans will live in a world altered beyond recognition by climate change.

In the book’s second section, “Elements of Chaos,” Wallace-Wells devotes each chapter to a specific threat climate change poses to the world: heat death, famine, sea level rise, wildfires, “disasters no longer natural,” freshwater drain, dying oceans, air pollution, diseases, economic collapse, climate conflict, and “systems” – the last chapter of which he uses to point out that none of these threats will occur in a vacuum, but will collaborate with and influence one another.

Wallace-Wells uses the book’s third section to explore different aspects of what he calls “the climate kaleidoscope” – the mechanism that “transforms our intuitions about environmental devastation into an uncanny complacency,” such that “it can be hard to pull the whole picture of climate distortion into focus” (11). He divides the sections into six chapters focusing on narrative, capitalism, technology, politics, history, and ethics. In each chapter, he examines how each particular structure of human invention distorts our view of climate change, and predicts how climate change might alter the way we interact with these structures.

The book’s concluding section, “The Anthropic Principle,” is presented as an empowering call to action, in which Wallace-Wells explores two philosophical models for contemplating the cosmos. The first, Fermi’s paradox, poses the question, “If the universe is so big, then why haven’t we encountered any other intelligent life in it?” (221). The counterpoint to this is “the anthropic principle” from which the section takes its title, which “takes the human anomaly not as a puzzle to explain away but as the centerpiece of a grandly narcissistic view of the cosmos” (225). Wallace-Wells suggests that the anthropic principle might be humanity’s best bet for stopping climate change, asking the reader, “Why should we be suspicious of our exceptionality, or choose to understand it only by assuming an imminent demise? Why not choose to feel empowered by it?” (225).