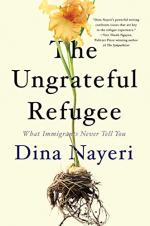 Dina Nayeri
This Study Guide consists of approximately 87 pages of chapter summaries, quotes, character analysis, themes, and more - everything you need to sharpen your knowledge of The Ungrateful Refugee.

The Ungrateful Refugee: What Immigrants Never Tell You Summary & Study Guide includes comprehensive information and analysis to help you understand the book. This study guide contains the following sections:

This detailed literature summary also contains Topics for Discussion on The Ungrateful Refugee: What Immigrants Never Tell You by Dina Nayeri.

The following version of this book was used to create this study guide: Nayeri, Dina. The Ungrateful Refugee. Catapult, 2019.

In first-person narration that stays primarily in past-tense, the author uses the memoir form as a springboard into larger considerations of what it means to be a refugee. She does so principally from the perspective of the refugee, but also looks at how Western countries tend to view those attempting to make a better life for themselves within their borders.

The book’s four main parts follow a roughly chronological narrative line. In Part One, the author describes her early life as a child in Iran, and the circumstances that made it increasingly difficult for her mother to live the life that she wanted to live. The author also describes how the dangers facing her mother led her to make an attempt to escape to the West, taking with her the author and her younger brother but leaving behind her husband. In Part Two, the author describes the various experiences she and her family encountered on their journey to the west. These include an escape defined by what her mother referred to as The Three Miracles, and an extended stay at a refugee center in Italy.

Part Three contains the author’s consideration of how she and her family struggled to make new lives for themselves when they finally did arrive in America. A key point of focus here is how the author became determined to make herself into the best possible American she could be, and how that determination became something of an obsession. In Part Four, the author continues her consideration of that aspect of her life, describing how that determination/obsession led her into choices that defined her education and young adulthood. Finally, in Part Five, she sums up her arguments, analyses, and commentary from the previous four chapters. In doing so, she pays particular attention to what she imagines might be the life of her young daughter, Elena.

Within this overall framework, the author also layers in stories of other refugees that illustrate the points she is making about her own life. All these points, in their turn, relate to the book’s core thematic consideration of what it means to be a refugee, in terms of both the countries who take them in and of the refugees themselves. For example, she offers several instances of how Western countries react to the presence of refugees who apply for asylum. She includes examples of those who succeed, such as the Iranian refugee who became a highly successful lawyer, and those who did not, such as the Iranian refugee who set himself on fire in a public display of his despair and frustration. The former became one of the author’s sources for the book; the latter died.

All the stories included by the author support her book-long contention that the West neither does enough for refugees nor knows enough about the truth and extent of their desperation and suffering. They also support another, similarly book-long contention. This is the thematically central idea that the stories of refugees like her are not necessarily true. They may contain elements of what exactly happened to the persons telling them, but just as often, the author says, they are defined more by what those persons believe the immigration officials hearing their stories want to hear.

As the book comes to a close, there is a sense that while the author has made a degree of peace with both her history as a refugee and her new Americanized identity, that peace is fragile and volatile. She seems very aware of the inner tensions between who she was, what she has become, and what she has come to believe about both those sides of her identity. She concludes with a comment that everyone is, on some level, a refugee from who they were, trying to make a new life for themselves defined by both what they can be and what they want to be. “We are all,” she says, “immigrants from the past,” while the future, she adds, “is a foreign place, like all futures” (346).

More summaries and resources for teaching or studying The Ungrateful Refugee: What Immigrants Never Tell You.

The Ungrateful Refugee: What Immigrants Never Tell You from BookRags. (c)2022 BookRags, Inc. All rights reserved.