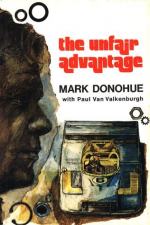 The Unfair Advantage Topics for Discussion

Mark Donohue
This Study Guide consists of approximately 27 pages of chapter summaries, quotes, character analysis, themes, and more - everything you need to sharpen your knowledge of The Unfair Advantage.

Why would it take Mark Donohue ten years to figure out how great one little advantage of a car, like balance, is?

What, according to the author, makes a great race car driver?

What is the unfair advantage of the title?

Who is Roger Penske? Why is he significant in the book?

Give your own opinion of Roger Penske's extreme rule changes and courses of action based upon a realistic assessment of circumstances. During the book Donohue at one point observes that Penske was known to make rather drastic and pervasive changes based upon a realistic sense of the conditions of the racing world. This could be interpreted as unethical or as ethical. Give your view.

More summaries and resources for teaching or studying The Unfair Advantage.