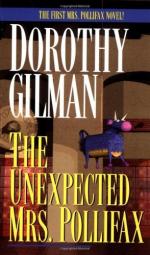 Dorothy Gilman
This Study Guide consists of approximately 32 pages of chapter summaries, quotes, character analysis, themes, and more - everything you need to sharpen your knowledge of The Unexpected Mrs. Pollifax.

This detailed literature summary also contains Topics for Discussion and a Free Quiz on The Unexpected Mrs. Pollifax by Dorothy Gilman.

Mrs. Emily Pollifax is a widow struggling to find meaning in her life. When she goes for a doctor's appointment, he notes that she seems somewhat depressed and asks if she is alright. She gives him only a brief overview, enough for him to know that she needs something to spark some excitement, and he encourages her to find that thing. What she does not tell him is that she had been to the point of suicide at one point, considering that it would not be such a bad fate to throw herself off the edge of her roof. With the doctor's advice and her memories of a woman who had taken to the stage at an advanced age, Mrs. Pollifax decides that she will do something to make her life exciting. Toward that end she travels to Fairfax, Virginia, to the CIA headquarters and asks to see Mr. Mason. At that moment, Mr. Mason is expecting to interview a young agent for a courier mission and the head of the department, Mr. Carstairs, assumes Mrs. Pollifax is that woman. Mr. Carstairs hires her and, despite her lack of training, sends her on what they both believe will be a three-week stay in Mexico City with the opportunity to sight-see and orders to pick up a package that contains microfilm from another agent.

Mrs. Pollifax arrives as expected and locates the book store where she is supposed to pick up the package. On impulse she goes inside and meets the proprietor who gives her a book on solitaire and a deck of cards. She does not realize until her eventual return to the United States that the film is in the deck of cards. On the appointed day, she returns to the store and finds the proprietor gone. She drops the code words to the man who claims he owns the store and the man drugs her. When she next wakes, she is tied to another spy, Johnny Farrell, and on a plane. She is drugged again and wakes on another plane. She eventually discovers that she and Farrell have been taken to Albania, the one strong-hold of Communism in Europe, where they are held in a remote compound. There she finds her natural tendency to make friends and trust people tested, but continues to see the best in everyone she encounters, including her captors.

Farrell is injured early on in an attempt to kill himself to keep his secrets from his captors, but Mrs. Pollifax insists on medical attention and he is soon on the mend though suffering the effects of a severely broken leg. Mrs. Pollifax eventually earns the respect of a Russian spy who lends help as she and Farrell make plans to escape. On impulse, Mrs. Pollifax talks to a Chinese prisoner also being held in the compound and he turns out to be a kidnapped scientist who helps Mrs. Pollifax and Farrell on their quest for freedom. The three encounter many dangers as they make their escape, but do make it out to sea where they are picked up by a ship. Mrs. Pollifax returns home with her friends and family none the wiser about her recent adventure.

More summaries and resources for teaching or studying The Unexpected Mrs. Pollifax.