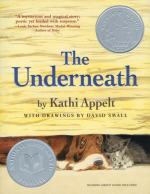 The Underneath Summary & Study Guide

Kathi Appelt
This Study Guide consists of approximately 55 pages of chapter summaries, quotes, character analysis, themes, and more - everything you need to sharpen your knowledge of The Underneath.

The Underneath Summary & Study Guide Description

The Underneath Summary & Study Guide includes comprehensive information and analysis to help you understand the book. This study guide contains the following sections:

This detailed literature summary also contains Quotes and a Free Quiz on The Underneath by Kathi Appelt.

Promises, regret, love, and loneliness are all facets of the book “The Underneath” by Kathi Appelt. Two kittens and an old hound dog give a centuries old serpent the chance to champion love, a choice she forfeited years prior with her own daughter. The story is filled with the Native American view of interconnectedness between people, animals, and plants.

A pregnant calico cat, abandoned by her family, is drawn to a lonely hound dog named Ranger when she hears the sound of his mournful baying. The two become fast friends. When her kittens are born, Ranger takes over the role as father figure for the two kittens, Puck and Sabine. The problem for Ranger and the cats is that he is chained to the porch of a cruel man named Gar Face. Ranger had helped Gar Face in his hunts until one night when Ranger stepped between Gar Face’s gun and a bobcat with a kitten. Ranger was shot in the leg, and he has been chained to the house ever since as his punishment for betraying the man.

Although the kittens have been warned to stay in the underneath, under the porch, Puck is drawn out by the sun one morning. The naughty kitten is spotted by Gar Face who grabs him. The calico cat runs out to try to save her baby, but Gar Face grabs her as well. He stuffs the two into a burlap bag and throws them into a creek. Puck survives the drowning attempt, but his mother does not. Puck finds himself alone on the creek bed. He takes up residence in an old, dying loblolly pine tree.

Meanwhile, another story is told about events that took place a thousand years before. It tells how a serpent came to be trapped in a jar entangled in the roots of the loblolly pine. The tree is the same one where Puck now takes shelter. The trapped serpent is a lamia, an enchanted being able to change once in its life to his human form, then back to its animal form. At one time, this lonely serpent had a daughter named Night Song. Night Song gave up her serpent form to be married to Hawk Man, also an enchanted being. Believing she had been betrayed, Grandmother tricked Night Song into changing back into a serpent, without telling her she could never return to her human form. Having been lured away from her husband and young daughter, Night Song mourned and refused to eat until she died.

Sensing her father’s distress because her mother had disappeared, Night Song’s daughter went on a search for Grandmother because her mother had told her that if she ever needed help, Grandmother could help her. Grandmother, however, was on the way to the village in which Night Song had lived with Hawk Man and their daughter. Grandmother met Hawk Man. She had planned on stealing her granddaughter away. Instead, Hawk Man grabbed her and stuffed her into a large jar that Night Song had made for her daughter’s tenth birthday. He buried the jar on the creek bed. In his fight with Grandmother, Hawk Man was injured and the poison from the old serpent threatened to kill him. For a long while, he refused to take back his avian form because he did not want to abandon his daughter.

For one thousand years, Grandmother has been stuffed in the jar beneath the loblolly pine. She doesn’t know that her granddaughter had gotten lost trying to find her and has turned into a hummingbird, the bird that foreshadows death. Hawk Man, also, has taken back his avian form.

Grandmother’s story about her daughter and the story of the kittens and the hound merge one night when Gar Face decides to use Sabine as bait for a 100-foot alligator he hopes to catch. In an effort to protect the one friend he has left, Ranger bites Gar Face, making him drop the kitten. Then, Gar Face sets his dog on the bank of the creek as bait for the alligator. During the night, Sabine joins Ranger on the shore of the creek. When Gar Face sees the kitten has returned, he raises his gun to shoot her, but he is surprised by Puck’s howl and shoots his gun upward into the tree. Puck, perched on a branch above Gar Face, lets go of the branch and lands on Gar Face’s face. When Gar Face tries to wash the blood from his face in the creek, he attracts the old alligator. He is eaten.

Puck and Sabine are reunited, but Ranger remains chained to a tree. It is at this moment that Grandmother makes an appearance. At first, it appears that she may want to make a meal of the kittens and hound. Instead, she uses her strong jaws to snap Ranger’s chain. After her long, lonely, anger filled life, Grandmother has finally chosen to support love. She is commended by her old friend, the alligator, on her decision. Grandmother, however, has come to the end of her life as Gar Face’s stray bullet that went into the tree hits the ancient serpent. As she is dying, she is greeted by the hummingbird, her granddaughter, who tells her she has been looking for her for a long time. Meanwhile, the hound and his two kittens are said to still be in the forest.

More summaries and resources for teaching or studying The Underneath.

The Underneath from BookRags. (c)2021 BookRags, Inc. All rights reserved.