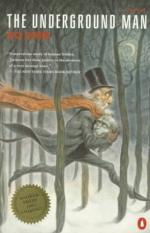 The Underground Man - From His Grace's Journal to Mr. Walker's Account Summary & Analysis

Mick Jackson
This Study Guide consists of approximately 34 pages of chapter summaries, quotes, character analysis, themes, and more - everything you need to sharpen your knowledge of The Underground Man.

From His Grace's Journal to Mr. Walker's Account Summary

These sections correspond to the final month of the Duke's life. The Duke shows signs of increasing madness culminating in his death.

On February 3, the Duke contemplates the phrenology chart Reverend Mellor gave him. According to the chart, the mind is compartmentalized into rooms occupied by little homunculi who are responsible for various personality traits such as Secretiveness, Combativeness and Benevolence. The Duke imagines that the homunculi become animated and start tearing down the walls dividing the mind into the compartments in which each homunculus lives. The homunculi begin to attack each other and anarchy results.

Three weeks later, the Duke shaves his head and his beard. He likens himself to the Fowler head. He remarks that he is "an amalgamation of all the maps of man." (241)

(read more from the From His Grace's Journal to Mr. Walker's Account Summary)

More summaries and resources for teaching or studying The Underground Man.