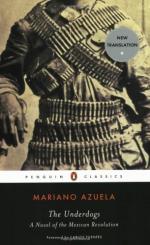 The Underdogs a Novel of the Mexican Revolution Summary & Study Guide

Mariano Azuela
This Study Guide consists of approximately 38 pages of chapter summaries, quotes, character analysis, themes, and more - everything you need to sharpen your knowledge of The Underdogs a Novel of the Mexican Revolution.

The Underdogs a Novel of the Mexican Revolution Summary & Study Guide includes comprehensive information and analysis to help you understand the book. This study guide contains the following sections:

This detailed literature summary also contains Topics for Discussion and a Free Quiz on The Underdogs a Novel of the Mexican Revolution by Mariano Azuela.

The Underdogs follows the rise and fall of Demetrio Macias and his band of rebels during the Mexican Revolution of the early nineteen hundreds. The novel charts Demetrio's rise from farmer to general of the northern rebel army, and his subsequent decline and the deterioration of his army.

Demetrio is forced to flee from his farm by Federal soldiers, and he accumulates a group of twenty similarly disaffected peasant men. In a skirmish with Federals, in which Demetrio's band is greatly outmatched, Demetrio nevertheless displays superior tactics and marksmanship, causing the Federals to retreat, though he is shot and becomes very sick in the process.

Feverish, Demetrio is brought to a ranch where his men are hailed as heroes of the peasants. There, he meets a man named Luis Cervantes, a former medical student who provides a larger, intellectual perspective on the Revolution. Demetrio becomes smitten with a local girl named Camilla who nurses him back to health, but Camilla has eyes only for Luis, who rejects her because of her low class origins.

Demetrio continues to score victories against the Federals and eventually displays heroics at the Federal army's last stronghold, Zacatecas, snatching victory from the jaws of defeat. He attains the rank of general.

After Zacatecas, Demetrio's army and his own psychological state, begin to decline. Where before they were motivated by the ideals of the revolution, now his army uses the revolution as a pretext for looting and murder. Two new recruits in particular, Blondie and War Paint, epitomize the sadistic abuse of power perpetrated by the men, as Blondie tortures townspeople for no reason, and War Paint delights in destruction, madness, and looting, completely unconcerned with the larger history being made around her. Towns begin to turn on Demetrio's army, viewing them as intruders and pirates rather than saviors. There is some promise that warfare may come to an end with an agreement for a new President at a town called Aguascalientes, but, appropriate to the pessimistic mood of the novel throughout, Aguascalientes only ends with more uncertainty and an extension to the revolution, when it is revealed that two rebel leaders are now vying for the Presidency. Demetrio understands little of the politics of the war and wishes only to fight and be told what to do and where to be.

In the final days, Luis abandons Demetrio, and many of Demetrio's friends and soldiers have died. Demetrio revisits his wife and child at his farm, but, a changed man, he can no longer go back to his old existence. Thereafter, Demetrio pessimistically trudges toward certain death against a rival rebel faction near his former farm, forever changed and made soulless by war.

More summaries and resources for teaching or studying The Underdogs a Novel of the Mexican Revolution.

The Underdogs a Novel of the Mexican Revolution from BookRags. (c)2022 BookRags, Inc. All rights reserved.