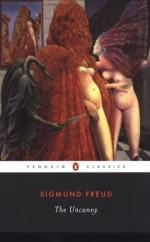 Sigmund Freud
This Study Guide consists of approximately 20 pages of chapter summaries, quotes, character analysis, themes, and more - everything you need to sharpen your knowledge of The Uncanny.

The Uncanny Summary & Study Guide includes comprehensive information and analysis to help you understand the book. This study guide contains the following sections:

This detailed literature summary also contains Topics for Discussion and a Free Quiz on The Uncanny by Sigmund Freud.

The Uncanny is a collection of essays by Sigmund Freud, who mostly uses the psychoanalytic approach to try and understand the creative mind. Some of the essays, most notably, "Screen Memories" and "Family Romances", are more general and apply to psychological development in general, not just to the development or minds of artists.

"Screen Memories" is that first memory and deals with pseudo memories of childhood that Freud calls "screen memories." A screen memory looks like a memory of childhood but is often too early to have actually been from childhood and often has features that make it seem like a fabrication rather than an actual memory. In the essay, Freud examines several different case studies to show the working s of "screen memories." In the next essay, "Creative Writing and Daydreaming," Freud looks at how the phenomenon of daydreaming is related to both the development of creative ideas for stories and to nocturnal dreaming. Most creative stories, Freud claims, are of the same form as daydreams and are similar to nocturnal dreams in that they show the ego living out fantasies that are not possible in regular, everyday life. The next essay "Family Romances" looks at the childhood development of the mind as the child develops sexual interest in his parents and family members while mentally maturing.

The final and title essay also looks at a phenomenon of literature through a psychoanalytic lens, the uncanny. The uncanny, at least in German, is closely related etymologically to its opposite, and Freud uses this linguistic relationship to argue that the uncanny is no something strange, but rather something familiar that has been repressed or changed in some way. We find ghosts or doubles to be uncanny and many men often find aspects of the female uncanny. There is a similarity to the subject in all of these things, but all also have an important different that leads to them being uncanny. In this essay, Freud investigates many different forms of the uncanny to try to understand the root that links all of them in the mind of the person observing them.

More summaries and resources for teaching or studying The Uncanny.

The Uncanny from BookRags. (c)2022 BookRags, Inc. All rights reserved.