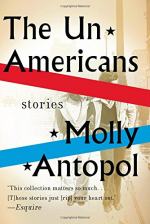 Molly Antopol
This Study Guide consists of approximately 73 pages of chapter summaries, quotes, character analysis, themes, and more - everything you need to sharpen your knowledge of The UnAmericans.

The UnAmericans Summary & Study Guide includes comprehensive information and analysis to help you understand the book. This study guide contains the following sections:

This detailed literature summary also contains Quotes and a Free Quiz on The UnAmericans by Molly Antopol.

There are eight stories in the collection, each focusing on a different protagonist in a different situation but sustaining certain similarities in narrative style, thematic orientation, and emotional perspective: tensions between parents and children appear frequently, as do hints at varying experiences of exile, frank references to sexuality, and evocations of Jewish life, attitudes, and perspectives.

In the first story of the collection, “The Old World”, middle-aged protagonist Howard finds himself caught between an emerging search for spiritual connection with his abandoned faith (as represented by his newly orthodox daughter) and a similarly emerging search for emotional connection with a beloved (as represented by his newly minted relationship with the attractive Svetlana. In the next story, “Minor Heroics” a much younger protagonist (discontented Israeli soldier Oren) also finds himself caught between two conflicting desires: to be accepted and respected, out of the shadow of his more popular and successful older brother while, at the same time, concerned that that brother’s spirit, pride, and general identity have been shattered as the result of injuries suffered in an accident that was, in some way, Oren’s fault.

In “My Grandmother Tells Me This Story”, narrator Raya reveals secrets about a life full of regret and violence to a granddaughter that, she says, should not be digging around in uncomfortable truths, while in the story that immediately follows, “The Quietest Man”, protagonist Tomas also finds himself brought face-to-face with uncomfortable truths about himself and about his past. Unlike Raya, however, he doesn’t admit those truths: instead, he takes refuge in lies that, he says, will help his troubled daughter come to terms with herself, but which in fact lead that daughter to a false impression of her father that will only benefit her, not him.

The protagonist of “Duck and Cover”, teenaged Judy, is another troubled Jewish daughter. Her father, who is never identified by name, is active in the Communist Party of the 1950’s, a group who believed in radical economic, cultural, and political reform along the lines of those practiced by the inhabitants and government of the then-Soviet Union. Judy is resentful of the time and attention her father gives to the Party, both of which she believes she should receive more of. Her act of rebellion involves spending time with a non-Jewish, non-Communist boy, but her choices quickly re-prioritize when she discovers that her father has been arrested and will likely be thrown in jail. Meanwhile, in the next story (“A Difficult Phase”), another discontented female protagonist (mid-thirties Talia) begins a relationship with a man that is fulfilling for a short time, but which leads her into a more fulfilling, and more emotionally connected, relationship with the man’s teenaged daughter.

Another troubled parent/child relationship is the anchoring element in “The Unknown Soldier”, the story of a man who, like Judy’s father, was arrested as a result of his involvement in Communist Party activities and who, after his release from jail, is determined to bond with his estranged son. His efforts, as well intentioned as they seem to be, ultimately end in failure, but that doesn’t stop his son from continuing to reach for him from his side of the divide between them. The final story in the relationship also features two characters reaching for each other – in “Retrospective”, recently separated Boaz struggles to understand why his estranged (and newly pregnant) wife Mira left their relationship, and also to reconnect with her. The possibility of that reconnection seems to disappear when he discovers both the truth behind her choice and the fact that her beloved grandmother made a similar choice – although in her case, her husband put up with the situation in a way that, narration suggests, Boaz is unable to.

More summaries and resources for teaching or studying The UnAmericans.

The UnAmericans from BookRags. (c)2022 BookRags, Inc. All rights reserved.