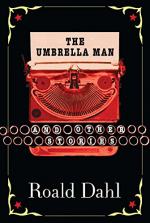 Related Topics
Ah, Sweet Mystery of Life: The Country Stories of Roald Dahl
Charlie and the Chocolate Factory
Collected Stories
James and the Giant Peach
Lamb to the Slaughter
Matilda
My Uncle Oswald
Roald Dahl
Tales of the Unexpected (book)
The Best of Roald Dahl
The BFG
Danny the Champion of the World
Fantastic Mr. Fox
Charlie and the Great Glass Elevator
George's Marvelous Medicine
The Twits
Skin (Roald Dahl)
Beware of Dog
The Way Up to Heaven

Roald Dahl
This Study Guide consists of approximately 17 pages of chapter summaries, quotes, character analysis, themes, and more - everything you need to sharpen your knowledge of The Umbrella Man.

This detailed literature summary also contains Quotes and a Free Quiz on The Umbrella Man by Roald Dahl.

The following version of this story was used to create this study guide: Dahl, Roald. “The Umbrella Man.” The Collected Short Stories of Roald Dahl. Penguin Books, 1992, p. 661 – 666.

The story begins with the narrator, a twelve-year-old girl, telling the reader that she and her mother were waiting for a taxi on a rainy evening after a dental appointment. They were waiting a long time with no luck, when a little man with a white moustache appeared and asked them for some taxi fare. The mother was skeptical, so she interrogated him.

The young girl wanted her mother to give the old man the money immediately, but the mother saw this as an opportunity to teach her daughter not to trust strangers. However, the old man’s charm overpowered the mother’s skepticism, and after the man offered the mother a silk umbrella in exchange for a pound, the mother gave in and presented the man with a pound.

Moments later, the mother and daughter noticed the old man stroll into the nearest pub and order an expensive glass of whiskey. He then paid with the pound that the mother had given him, and before he left the pub, he stole an umbrella from the coat rack. He then wandered to another part of the street and exchanged that umbrella for another pound from somebody else. He then left to find another pub.

More summaries and resources for teaching or studying The Umbrella Man.