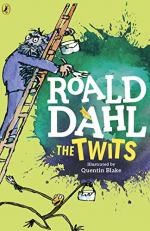 Get The Twits from Amazon.com
View the Study Pack
View the Lesson Plans
Study Guide
Order our The Twits Study Guide

Roald Dahl
This Study Guide consists of approximately 23 pages of chapter summaries, quotes, character analysis, themes, and more - everything you need to sharpen your knowledge of The Twits.

The Twits Summary & Study Guide includes comprehensive information and analysis to help you understand the book. This study guide contains the following sections:

This detailed literature summary also contains Quotes and a Free Quiz on The Twits by Roald Dahl.

NOTE: The following version of this book was used to create this study guide: Dahl, Roald. The Twits. Paperback edition. Puffin Books, 2013.

The Twits is a children’s novel by Roald Dahl in which Muggle-Wump and his monkey family work with local birds to escape from, and seek revenge on the nasty Mr. and Mrs. Twit. Mr. and Mrs. Twit are horrible people. Mr. Twit has a large, nasty, dirty beard that he has not cleaned in years while Mrs. Twit is hideously ugly because of all the mean and ugly thoughts she has inside. The Twits take delight not in loving each other, but in playing cruel tricks on each other. For example, Mr. Twit puts a frog in Mrs. Twit’s bed and convinces her she is shrinking by adding height to her walking stick, while Mrs. Twit serves Mr. Twit spaghetti full of worms, telling him about the worms only afterward.

Each week, Mr. Twit covers the Big Dead tree with Hughtight Sticky Glue to capture birds for Bird Pie. The birds are always warned by Muggle-Wump and his African monkey family not to land on the tree, but the birds do not speak African and cannot understand them. Muggle-wump and his family are kept by the Twits and made to spend hours standing on their heads in training to be a part of an upside-down circus the Twits are planning. One day, a Roly-Poly Bird from Africa vacationing in England meets the monkeys in their cage. They warn Roly-Poly about the tree, and Roly-Poly communicates this to the local birds, keeping them safe.

The Twits are enraged by the fact that they have not been able to capture any birds, and are even angrier when all the birds laugh at them. They decide to go and buy large shotguns. While they are gone, Roly-Poly grabs the cage key to free Muggle-Wump and his family. Together with the birds, Muggle-Wump leads a plot of revenge against the Twits. Using Hugtight Glue, they turn the Twits’ living room upside-down by gluing everything to the ceiling. When the Twits return, two ravens drop glue on their heads before they make it inside.

The Twits are stunned to find their house upside-down. Mr. Twit encourages Mrs. Twit to stand on their heads to make things right. However, the Twits end up stuck to the floor upside-down. No matter what they do, they cannot get unstuck. Meanwhile, Muggle-Wump and his family build a cozy house in the woods where they celebrate with the birds. Muggle-Wump and his family will return to Africa in the winter when Roly-Poly flies south. A week later, Fred, the gas meter man, discovers the Twits have disappeared, having shrunk into themselves, leaving only their smelly clothing behind.

More summaries and resources for teaching or studying The Twits.

The Twits from BookRags. (c)2022 BookRags, Inc. All rights reserved.