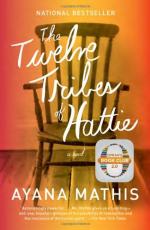 The Twelve Tribes of Hattie Summary & Study Guide includes comprehensive information and analysis to help you understand the book. This study guide contains the following sections:

This detailed literature summary also contains Quotes and a Free Quiz on The Twelve Tribes of Hattie by Ayana Mathis.

The following version of this book was used to create this study guide: Mathis, Ayana. The Twelve Tribes of Hattie. New York: Alfred A. Knopf, 2012. Hardcover

The novel begins in Georgia in 1925. Hattie Shepherd and her husband August are preparing to move to Philadelphia. Hattie is 17 years old and has given birth to twins. Hattie’s father was recently murdered in cold blood by white men. (All of the novel’s central characters are African-American.) Hattie and August wish to escape the racial oppression of the southern states. Soon after Hattie and August arrive in Philadelphia, the twins tragically die of pneumonia. The novel then shifts ahead to the year 1948. Hattie and August’s son Floyd is in his early twenties and is a successful jazz trumpet player. He is a womanizer and has many brief sexual relationships. He is also bisexual, but he hides this fact about himself and does not pursue relationships with men. However, when he goes on a performance tour in Georgia, he has sex with a man for the first time and begins to fall in love with the man. Floyd wants to pursue the relationship, but he ultimately decides not to do so, as he is scared of the social persecution.

The narrative then shifts ahead to 1950. Hattie and August’s son Six is 15 years old. He has many severe burns on his body due to an accident that occurred when he was nine years old. Six also sometimes goes into strange fugue states. These states sometimes cause Six to preach Christian gospel, even though Six is ambivalent about religion. One day, a fugue state causes him to severely beat another boy. To protect Six from retaliation, Hattie sends Six on a tour of southern Christian congregations with a local reverend. Six maintains his ambivalence about religion, but he sees how religion can be used as a tool to help other people, so he decides to remain in Alabama and becomes a church pastor there. The narrative then shifts ahead to 1951. The narrative reveals that August has been a neglectful husband and father and has had many extramarital affairs. Hattie then has an affair with a local man named Lawrence. Hattie eventually becomes pregnant by Lawrence and gives birth to the child. Hattie and Lawrence decide to start a new life together in Baltimore, but Hattie quickly changes her mind.

The novel then shifts ahead to 1954. Hattie is in her mid-forties, but she has one more child: daughter whom Hattie and August name Ella. Hattie and August are on welfare and are unsure if they can support another child. They decide to give Ella away to Hattie’s sister, but Hattie soon changes her mind. The novel then shifts ahead to 1968. Hattie and August’s daughter Alice is married to a wealthy doctor. Alice and her brother Billups are codependent. Alice and her husband allow Billups to live with them. Eventually, Billups finds a full-time job and decides to live on his own. Alice is quite distraught at this turn of events and tries to stop it, but she cannot. The novel then shifts ahead to 1969. Hattie and August’s son Franklin is in his early twenties. He is a soldier in the Vietnam War. He has a wife and child back home. He is also an alcoholic and a drug addict. He eventually decides to stop trying to win back his wife, as he knows that his wife and child will be better off without him.

The novel then shifts ahead to 1975. Hattie and August’s daughter Bell is estranged from her family and is dying of tuberculosis. A few years earlier, Bell had an affair with Lawrence after Hattie and Lawrence’s relationship ended. Hattie found out, and a deep rift formed between Hattie and Bell. Bell is fortunately rushed to the hospital before she dies of tuberculosis. Hattie visits Bell in the hospital, and they reconcile. The narrative then shifts ahead to 1980. Hattie and August’s daughter Cassie suffers from a mental illness that appears to be schizophrenia. She is unmarried, and she has a young daughter named Sala. Hattie and August allow Cassie and Sala to live with them. Eventually, Cassie has to be checked in to a mental hospital for an unknown period of time. Hattie and August continue to take care of Sala.