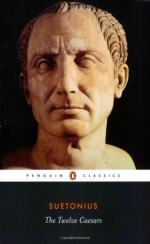 Suetonius
This Study Guide consists of approximately 35 pages of chapter summaries, quotes, character analysis, themes, and more - everything you need to sharpen your knowledge of The Twelve Caesars.

This detailed literature summary also contains Topics for Discussion and a Free Quiz on The Twelve Caesars by Suetonius.

The Twelve Caesars is probably the most in depth book ever written about the personal lives of the twelve caesars. Suetonius goes to great lengths to reveal the way these men really were, as human beings. Each emperor is dissected, and his actions beyond politics and professionalism revealed. The reader learns about their vices, their relationships with their wives, and their interaction with their own family members. After learning about the leaders' lives, their deaths and the events leading up to them are revealed, sometimes in great length. Every biography is rich with details and very personal. The book begins with Julius Caesar.

Suetonius takes the reader through the life of Julius Caesar by first revealing that his father died at an early age. He rises to become one of the greatest military leaders Rome ever has, and then becomes the greatest emperor. He is very loyal to all of his friends and family, unlike many of the other emperors. Augustus follows Julius Caesar and he too is a loyal person. Everything he does is to avenge Julius Caesar. He cares a lot about his reputation and the reputation of his family members, which is why he banishes his daughter Julia when she acts disgracefully in public. After his daughter cheats on Tiberius, he draws up divorce papers for them to end the marriage since Tiberius is going to be emperor eventually and cannot have her as a wife. Augustus is a very modest man and does not like too much public praise. He is also very forgiving and does not let it affect him when people speak badly of him, though he does fine them. When Augustus dies, Tiberius takes over, as Augustus planned. He is not a very good emperor and his personal vices are peculiar and even disturbing. People believe he is killed by Gaius with a poison.

Gaius is Tiberius' grandson and comes to power quickly and easily. The people generally like him, though he too has some peculiar habits, including sleeping with his sisters. He is killed after ruling for only three years. Claudius succeeds him, though nobody in his family prepares him for the political scene. Everyone says he is ugly, stupid, and slow and will never amount to anything. Despite the way his family treats him, he is very loyal to them and always seeks ways to honor Augustus. Nero comes to power after Claudius' mysterious death. Nero is an interesting emperor and was probably the most peculiar. He has a real love of and obsession with music. He performs often and forces people to watch him, threatening to punish them if they leave his recitals. People get really tired of Nero and living under his reign and disgusting habits, so he is ousted and killed.

Next comes Galba, who rules for only a few months before Otho has him overthrown and killed. Otho's reign is distinctive in that people believe he rules to set an example by reinstating the rightful government and justice that Rome deserves. Vitellius rules for a short while and is succeeded by Vespasian who is a good leader. He has two sons, Titus and Domitian. Titus is the good son who does a lot for Rome, Domitian is his jealous younger brother, always scheming against him. The Empire is better off once he is killed.

More summaries and resources for teaching or studying The Twelve Caesars.