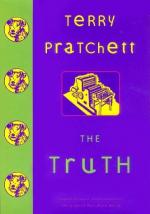 The Truth: A Novel of Discworld Summary & Study Guide

Terry Pratchett
This Study Guide consists of approximately 63 pages of chapter summaries, quotes, character analysis, themes, and more - everything you need to sharpen your knowledge of The Truth.

The Truth: A Novel of Discworld Summary & Study Guide Description

The Truth: A Novel of Discworld Summary & Study Guide includes comprehensive information and analysis to help you understand the book. This study guide contains the following sections:

This detailed literature summary also contains Topics for Discussion and a Free Quiz on The Truth: A Novel of Discworld by Terry Pratchett.

The Truth by Terry Pratchett follows the establishment by young William de Worde of Discworld's first newspaper and its baptism of fire, disproving charges of attempted murder and embezzlement against the Patrician, Lord Havelock Vetinari.

William de Worde earns a meager living writing things down, including a rumor that dwarfs can turn lead into gold. This proves a metaphor for movable type and William soon heads the Times, a full-fledged newspaper. Beyond Gunilla Goodmountain and his team of dwarf printers, William builds a core staff consisting of Sacharissa Cripslock, editor and headline writer, and Otto Chriekh, photographer and reformed vampire. Sales are surprisingly brisk as popular features are added, but the wealthy Engravers' Guild founds a rival paper called the Inquirer, intended to force William out of business as fast as possible. William however, follows the story of Lord Havelock Vetinari who is being arrested for attempted murder and embezzlement and unearths clues missed by the hapless City Watch (police) that suggest him innocent.

The plot is carried out by professionals Pin and Tulip, known as the New Firm. Their only mistake is letting Vetinari's terrier, Wuffles, escape. Everyone begins searching for Wuffles, either to receive the reward offered by the paper, or to obtain his testimony via a werewolf interpreter, or to eliminate him at a witness. When Otto captures a picture of the bad guys using black light, Pin sees the shades of victims waiting for him and his mind begins unraveling. He needs revenge before fleeing the city. They threaten William and Sacharissa when an accidental fire breaks out, consuming the Times' office. Determined that the big story must be told, they hijack the Inquirer's press. Vetinari is vindicated. Both Vetinari and Watch have no choice but to tolerate and perhaps cooperate with the Times.

During the investigation, William finds evidence that his father is behind the Committee to remove the Patrician. He confronts his father. William agrees not to name him publicly if he leaves town, in order to spare the family dishonor. No longer an absolute idealist, William accepts that journalists must tell whatever portion of the truth is available and not worry about eternal truths. He has the tools to survive in this tough profession.

More summaries and resources for teaching or studying The Truth: A Novel of Discworld.

The Truth: A Novel of Discworld from BookRags. (c)2022 BookRags, Inc. All rights reserved.