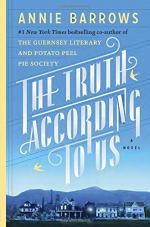 The Truth According to Us Summary & Study Guide

Annie Barrows
This Study Guide consists of approximately 76 pages of chapter summaries, quotes, character analysis, themes, and more - everything you need to sharpen your knowledge of The Truth According to Us.

The Truth According to Us Summary & Study Guide Description

The Truth According to Us Summary & Study Guide includes comprehensive information and analysis to help you understand the book. This study guide contains the following sections:

This detailed literature summary also contains Quotes and a Free Quiz on The Truth According to Us by Annie Barrows.

"The Truth According to Us" by Annie Barrows is a Depression-era historical fiction that explores the secrets of the Romeyn family of Macedonia, WV. Twelve-year-old Willa's determination to prove her ferocity and devotion lead her to discover long-hidden family secrets as she strives to protect her father from falling in love with Layla Beck, a writer researching the town's history. Meanwhile, Aunt Jottie's journey to acquire security for Willa and her sister turns to a path of self-discovery when Willa unveils Felix's darkest secret. "The Truth According to Us" is an interesting novel that clearly captures the souls of its characters as they struggle to reconcile the inevitability of history with the reality of their present existences.

The summer that she is twelve years old, Willa Romeyn determines to be ferocious and devoted when she begins to suspect she is being lied to. At the same time, Layla Beck is sent to Macedonia, WV to write the town's history after her Senator father financially cuts her off, and Layla boards with the Romeyn family. Eager to become Layla's confidante, Willa spies on the boarder's research, learning about Vause Hamilton who stole money from the mill and died in the mill fire but is oddly connected to Jottie. When Willa expresses shame of her family, Jottie begins pondering how to provide her nieces with security.

After seeing her father, Felix, emerge from Cooey's Red Apple, Willa begins to suspect him of being a bootlegger, and her continued investigations uncover more about the friendship between Felix, Vause and Jottie. Determined to make the History of Macedonia worth reading, Layla seeks assistance from several locals, including Jottie. When Felix shows an interest in Layla through his flirting, Jottie disapproves wholeheartedly, while Willa grows to hate Layla and determines that she will protect Felix from the writer. Layla is obviously falling in love with Felix, and on the frequent occasions that Jottie thinks of Vause, she reminds herself that she has a duty to hate him for what he put her family through.

Emmett disapproves of Jottie spending her life tending to Felix's demands, and after several chance encounters with Sol, Jottie escorts Layla to the mill where she agrees to a date with Sol, seeing him as a means of providing security for Willa and Bird. During her snooping, Willa discovers several of her father's cases in Mr. Tare Russell's basement; she finds a lot of money and a coat that obviously belonged to Vause as there is a picture of Jottie in the pocket. Jottie secretly dates Sol until Felix finds out and reminds her that she owes her brother loyalty, and he hates Sol for accusing Felix of being involved in the mill fire that took Vause's life. When Layla gets wind of these accusations, she feels that Felix is poorly misused.

When the mill workers strike, Sol is fired for colluding with the union, and Jottie meets with him to apologize for causing him to lose his job. She refuses his proposal, but on her birthday, she sneaks off to a horse show in Charles Town where she agrees to marry Sol. Willa lies to her family so she can stay home to interfere in Felix's romance with Layla, and when Jottie realizes that Willa is missing, she rushes home.

Felix is furious when Sol announces his engagement to Jottie, and trying to dissuade his sister from the match, he informs her that Vause never loved her, causing Jottie to cry. Unable to bear her father's cruelty or her aunt's tears, Willa emerges to inform Jottie that she found Vause's coat in Mr. Russell's basement and the photo of Jottie obviously indicates his love for her. It also proves Felix's involvement in the mill fire, causing Layla to refuse Felix as Jottie banishes him from her home.

Now that she knows Vause was not a liar, Jottie permits herself to love him again, but she begins questioning her feelings for Sol. Devastated that she has lost everything, Willa stops speaking. Sol believes he has everything he has ever wanted when he is promoted to president of the mill. Although she laments her indiscretions with Felix, Layla completes her manuscript with Jottie's help, and because of the book's success, she is given a new assignment on which she requests Jottie's help. Layla decides to stay in Macedonia because she feels that she belongs with the Romeyns. Emmett begins courting Layla who agrees to marry him only after she knows everything about him.

When Willa leaves the sesquicentennial picnic early, Felix accompanies her onto the roof, and at Willa's behest, Jottie joins them. Because Jottie is unable to forgive Felix, Willa explains that he loved Vause too and felt badly about his friend's death, but he lied to Jottie because he was afraid to lose her too. Pointing out that they cannot change the past, Willa observes that they must decide whether to hate each other, and although Felix leaves that night, Willa knows it will be okay. Jottie calls her engagement off with Sol and reconciles with her brother. Emmett marries Layla, and Willa is happy with her family.

More summaries and resources for teaching or studying The Truth According to Us.

The Truth According to Us from BookRags. (c)2022 BookRags, Inc. All rights reserved.