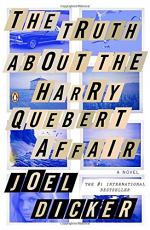 The Truth About the Harry Quebert Affair Summary & Study Guide

Joel Dicker
This Study Guide consists of approximately 73 pages of chapter summaries, quotes, character analysis, themes, and more - everything you need to sharpen your knowledge of The Truth About the Harry Quebert Affair.

The Truth About the Harry Quebert Affair Summary & Study Guide includes comprehensive information and analysis to help you understand the book. This study guide contains the following sections:

This detailed literature summary also contains Quotes and a Free Quiz on The Truth About the Harry Quebert Affair by Joel Dicker.

The following version of this book was used to create this study guide: Dicker, Joel. The Truth About the Harry Quebert Affair. Penguin Books. 2014.

The Truth About the Harry Quebert Affair by Joel Dicker is a romantic thriller in which struggling writer Marcus Goldman tries to prove the innocence of his mentor, Harry Quebert. The murder of fifteen year-old Nola Kellergan actually occurred thirty-three ago. A successful first-time novelist, Marcus has been unable to write a second novel. He is under immense pressure from his literary agency and publisher to do so.

To try to get a handle on things, Marcus contacts his mentor, famous writer Harry Quebert. Harry allows Marcus to come and visit him at his shore-side home in Somerset, New Hampshire. Quebert thinks that the visit might clear Marcus' writing block. The visit is unsuccessful. Not long after, the news carries word that landscapers have discovered the buried remains of Nola Kellergan, missing for three decades, on the edge of Harry’s property. One of Harry’s manuscripts was found buried with Nola. Harry is immediately arrested by Perry Gahalowood of the State Police. He is also held under suspicion for the murder of Deborah Cooper, who was killed the night Nola disappeared after trying to help her.

Marcus immediately sets out for Somerset, wanting to clear the name of the man who helped him become a writer. It is quickly learned that Harry was having a love affair with Nola at the time of her disappearance, when she was fifteen and he was thirty-four. It is also discovered that Harry’s second breakthrough novel, The Origin of Evil, was based on his love affair with her. The public is almost completely against Harry. Harry’s lawyer, Benjamin Roth, along with Marcus’s agency, push Marcus to investigate the case. The agency also encourages Marcus to write a book about everything. As Marcus investigates, he comes to accept that there really was real love between Nola and Harry and that Harry did not kill her. Marcus works with Gahalowood, Somerset Police Chief Travis Dawn. and his wife, Jenny, to pursue the investigation. A number of startling events, including the sudden murder of former Police Chief Pratt (who had forced Nola to give him oral sex), occur.

Marcus learns that Harry, after his first book, moved to Somerset in 1975 to write his dream novel. Harry was uninspired until he met Nola by chance on the beach. The two immediately fell for one another. Their love affair had to be kept secret, but it was discovered by Luther Caleb, the deformed chauffeur of Elijah Stern. Stern, a closeted homosexual, was the millionaire owner of the house where Harry stayed. Luther also loved Nola. He lived vicariously through her and Harry.

Both Luther (who hung around Somerset all the time) and Harry angered police officer Travis Dawn. Travis was secretly in love with Jenny Quinn, daughter of the owners of Clark’s Diner. However, Jenny was kind to Luther and in love with Harry. On the night of August 30, Harry and Nola were set to run away together to Canada. Luther, knowing what was about to happen, gave Nola a ride to where she and Harry were to meet, the Sea Side Motel. Luther did this out of love for Nola. Though he would lose his vicarious love affair, he wanted to see Nola happy more than anything else.

As Luther and Nola drove to the motel, Travis Dawn saw them drive by. Nola and Luther attempted to flee into the woods, but they were pursued by Dawn and then-Chief Pratt. Pratt and Travis beat Luther to death. Nola attempted to intervene, but Pratt smashed her in the face, bloodying her nose. Nola tried to escape to the nearest house, owned by widow Deborah Cooper. With Deborah now a witness to what was going on, Pratt killed Deborah. When Nola tried to escape, Travis killed her. Both men then proceeded to bury Nola’s body on Harry’s property since it was outside the search area for Nola. Then, both men disposed of Luther’s body by sending it over a cliff in a car out of state.

Jenny married Travis and covered for him when Marcus arrived in town to investigate. When Pratt appeared poised to crack, Travis killed him. Jenny again covered for Travis, and Jenny’s father covered for Jenny by attempting to dispose of Pratt’s service revolver. The revolver had been used to kill Deborah three decades before.

In the present, with the truth out, the public returns to its love of Harry. Marcus is made richer and more famous. However, one last startling truth emerges. Harry’s book The Origin of Evil was not written by Harry, but by Luther. While Harry has written other amazing books, the singular book associated with him makes him an imposter. Soon afterward, Harry disappears. He leaves behind his own manuscript, The Seagulls of Somerset. The manuscript fictionalizes his love with Nola. Marcus has The Seagulls of Somerset published under Luther’s name.

The Truth About the Harry Quebert Affair from BookRags. (c)2022 BookRags, Inc. All rights reserved.