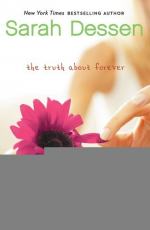 Sarah Dessen
This Study Guide consists of approximately 39 pages of chapter summaries, quotes, character analysis, themes, and more - everything you need to sharpen your knowledge of The Truth About Forever.

The Truth About Forever Summary & Study Guide includes comprehensive information and analysis to help you understand the book. This study guide contains the following sections:

This detailed literature summary also contains Topics for Discussion and a Free Quiz on The Truth About Forever by Sarah Dessen.

The Truth About Forever, by Sarah Dessen, follows teenager Macy Queen through the most pivotal summer of her life. Although she is privately still reeling from the death of her father less than two years earlier, Macy makes an effort to appear fine, even perfect, until she begins a part-time job at a catering company and becomes friends with its diverse group of young employees. As she gradually evolves under their influence, Macy realizes that it's okay to embrace life without fear.

Macy Queen's summer begins with sending her boyfriend, Jason, off to "brain camp" and taking over his job at the public library, where her co-workers are determined to make her life miserable. When her mother hosts a cocktail party to drum up business for her real estate company, Macy meets the staff of Wish Catering and pitches in to help them when everything seems to be going wrong. The owner, Delia, says that Macy has a knack for the business, so when Jason unexpectedly says that they should take a break from their relationship, Macy impulsively takes Delia up on her offer of a job.

As she gets to know the Wish crew, Macy is attracted to Wes, Delia's nephew and a talented artist who makes astonishing sculptures out of scrap metal and other junk components. The two become close friends by playing Truth, an ongoing game in which one player asks a question and the other must answer truthfully. As the questions become more personal and revealing, Macy begins to realize that it's okay to let others see her as she really is, flaws and all. Macy also becomes close with Kristy, another Wish employee, who helps her see a number of truths that she has been avoiding, including the fact that her relationship with Jason is completely wrong for her.

In the meantime, Macy's older sister, Caroline, has begun renovating the family's beach house, a project about which their mother, Deborah, is completely unenthusiastic. Since her husband's death, Deborah has focused her attention on work in order to avoid facing her grief, and she is anxious that Macy remain the perfect daughter. Accordingly, she becomes very upset when she begins to see changes in Macy and tries to re-exert control, eventually forbidding her to see her friends from Wish anymore.

In the end, Macy's two worlds collide when her mother is forced to hire Wish to cater an important event. Eventually, her mother sees that she can't control every aspect of her world and that the changes Macy is going through are positive ones, and Macy learns that forever does exist, but not in the way she had imagined before.

More summaries and resources for teaching or studying The Truth About Forever.

The Truth About Forever from BookRags. (c)2022 BookRags, Inc. All rights reserved.