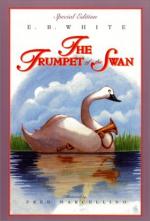 The Trumpet of the Swan Summary & Study Guide

E. B. White
This Study Guide consists of approximately 30 pages of chapter summaries, quotes, character analysis, themes, and more - everything you need to sharpen your knowledge of The Trumpet of the Swan.

The Trumpet of the Swan Summary & Study Guide Description

The Trumpet of the Swan Summary & Study Guide includes comprehensive information and analysis to help you understand the book. This study guide contains the following sections:

This detailed literature summary also contains Topics for Discussion on The Trumpet of the Swan by E. B. White.

The Special Edition of The Trumpet of the Swan by E.B. White, illustrated by Fred Marcellino, is a delightful story with charming illustrations. While it is essentially a children's book, it can be read by all ages. There are moral lessons to be learned all through the book. The main character in the book is the swan, Louis. Louis was born without a voice. A swan needs a voice in order to find his mate. Swans mate for a lifetime, so it is important to be able to court a lady swan by trumpeting to her. White calls the swan defective. Today we would say disabled. Louis overcomes his disability and wins his lady before the story ends.

White gives the reader a hero with a flaw. Our hero, Louis, does not sit around and whine. He does not give up. He attempts to find a way to overcome his problem. He spends over a year learning to read and write. Reading and writing does not work because the other swans cannot read. His father moves into the act at this point and breaks into a music store to steal a trumpet. Louis has a hard time discovering how to make a sound with the trumpet. Finally he finds a way, and he begins to practice. Once he can play a little, Louis goes to visit Sam Beaver. Sam convinced the teacher to allow a swan into the school so he could learn to read. He decided that Sam might know how to get a job. Sam gives him the idea of playing for a camp. Sam is going to Camp Kookooskoos. Sam gets Louis a music book of bugle calls, and Louis learns the different calls. The Camp agrees to hire him. He plays the bugle at the camp. Louis saves a boy who falls out of a canoe.

At the end of camp, Sam tells Louis about the Swan Boat in Boston Public Gardens. Louis goes to Boston. He is hired to swim before the boat and play his trumpet. He does this for the season. As the season ends, Louis gets a telegram asking him to come to Philadelphia and play in a night club. He will get five hundred dollars a week for ten weeks. Louis goes to the Philadelphia Zoo to live and goes to the night club to work. He plays concerts on Sunday at the Zoo. The concert is part of a deal made with the Zoo so the Zoo will not clip his wing and make him unable to fly.

He is almost finished with his night club engagement when there is a terribly bad storm and Serena is blown to Philadelphia. She comes down in the Zoo's lake. Louis is wise enough to let her rest and get herself together before he approaches her. He decides to awaken her by playing "Beautiful Dreamer" to her. He plays it and she wakes up to really see him. They began to flirt in a swan way. They swim around each other and then duck heads to one side and then the other of the opposite swan. Louis picks up his horn and plays the song he had written for her. Serena is in love. Finally his lady is in love with him.

Unfortunately, the Zoo wants to clip her wing. Louis convinces the Head Man not to clip her wings until Louis can get a friend to talk for him. He telegraphs Sam and Sam comes. Sam sees the Zoo and knows what he wants to do with his life. Sam makes a deal with the Zoo that Louis and Serena will stay free but Louis will bring any little cygnet that needs special care to the zoo.

Serena and Louis go back to Red Rock Lakes and find their families. Louis gives the money to his father so his father can pay the music storekeeper for his trumpet and any damage. Father swan goes back to Billings. Unfortunately, the storekeeper sees the swan coming and gets his gun. He only nicks the father swan, but when the swan sees his own blood, he faints. They hospitalize the swan but he is able to fly out the window at the hospital. The music storekeeper decides to donate any remaining money after he pays for the horn and the repairs to the Audubon Society. The father swan gets back home and is able to brag about his dangerous adventure.

The last chapter is mainly happily ever after. Serena and Louis go back to his birthplace pond every year. Louis takes his family on a trip around the country to all the places he worked each summer. The swans settle down in Red Rock Lakes for the winter, and they have many years together. Sam gets his job at the Philadelphia Zoo and everyone is happy.

More summaries and resources for teaching or studying The Trumpet of the Swan.

The Trumpet of the Swan from BookRags. (c)2022 BookRags, Inc. All rights reserved.