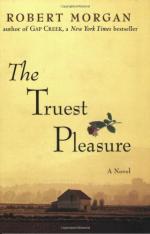 Robert Morgan
This Study Guide consists of approximately 48 pages of chapter summaries, quotes, character analysis, themes, and more - everything you need to sharpen your knowledge of The Truest Pleasure.

This detailed literature summary also contains Topics for Discussion and a Free Quiz on The Truest Pleasure by Robert Morgan.

The Truest Pleasure is the story of a couple who enter their marriage out of convenience - Ginny needs help caring for her father's land and Tom wants some land to call his own. Through the trials and tribulations of farm life and a tumultuous marriage, the couple comes together.

When the novel opens, fourteen-year-old Ginny attends her first Pentecostal revival with her family. She is surprised when she feels herself full of the spirit, speaking in tongues, rolling around in the sawdust. After, she is embarrassed by what happened to her and doesn't understand how she could have lost such control of herself. As Ginny ages, she wonders whether or not she'll ever get married. She is tall and awkward, with large hands and feet. She prefers the company of books and family over courting boys - completely opposite to her older sister Florrie, who is beautiful and flirtatious. All that changes when Ginny meets Tom Powell at a church picnic. She is drawn to his silly mustache and humorous nature. Soon after meeting, the couple is engaged and soon after that, they're married. It is clear that Ginny married Tom to have some companionship and to help her care for her aging father's land. It is also clear that while Tom loves Ginny, he was eager to have some land to call his own as he came from a poor family that had no land to pass down to him. Even on their wedding night, Tom would rather start work on the farm rather than be alone with his wife. When they do come together, though, the couple is completely at ease with each other, showing that despite their flaws of character, they do deeply love each other.

As time progresses, Ginny and Tom produce a houseful of children. With the birth of their first child, trouble begins to bubble to the surface of their marriage. Tom attends his first Pentecostal service with Ginny and is mortified when he sees her possessed by the spirit, speaking in tongues and rolling around on the ground. He remembers a group of freed slaves that started a Pentecostal church near his house and how he saw naked women dancing around a fire, calling it worship, and even saw a woman give birth to a dead baby after dancing too hard. These images have traumatized Tom and he believes worship like this is akin to devil-worship. Even though he demands that Ginny stay at home and care for the family, she refuses and keeps attending the meetings, which creates a huge wedge in the marriage. While Tom accuses Ginny of putting her devil worship before the family, Ginny accuses Tom of being blinded by greed and unable to experience the Spirit. Compounding these troubles is Ginny's suspicion of Tom's interest in her flirtatious sister, Florrie, whom he has hired to help Ginny with the washing, cooking, and cleaning, which Ginny resents. When Ginny falls ill with pneumonia, Florrie takes over all the housework, and Ginny believes Florrie is trying to weasel her way into the family so she can steal Tom for herself. Fearing that Tom believes he married the wrong sister and that she could too easily be replaced, Ginny fires Florrie. Even then, she doesn't stop attending the revivals, which draws Tom to pull a gun on her and fire in her direction as she walks to the church.

Even though they cannot seem to come together, Ginny and Tom do not divorce. They live as strangers, no longer sleeping in the same bed or speaking to each other. All that changes, though, when their land accidentally goes up in flames. They work side by side trying to battle the fire. It is clear to the reader that the land is the most important thing to both of them and they must put their differences aside to save it. This fight is, essentially, their baptism of fire. Even though they fail, it appears that Tom and Ginny will have a fresh start in their marriage as they work to rebuild what has been damaged, both physically and emotionally by the various "fires". Their work is cut short, however, when Tom falls gravely ill from his exertion fighting the fires. Ginny spends day and night nursing Tom through his typhoid, but eventually loses the battle and Tom dies. In the moments after Tom's death, Ginny realizes that she had not appreciated the gifts Tom gave her during their marriage and that loving him was indeed her truest pleasure.

More summaries and resources for teaching or studying The Truest Pleasure.