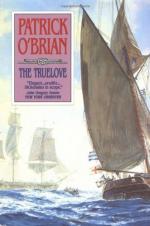 The Truelove Summary & Study Guide includes comprehensive information and analysis to help you understand the book. This study guide contains the following sections:

This detailed literature summary also contains Topics for Discussion and a Free Quiz on The Truelove by Patrick O'Brian.

Jack Aubrey and Stephen Maturin continue their voyage aboard the private man-of-war Surprise, hired on Royal Navy service. They depart Port Jackson and make course for the isle of Moahu where French influence is threatening British interests. Their mission is successful but seriously disrupted by the presence of Clarissa Oakes, a young female stowaway who causes contention among the crew and officers.

Captain Jack Aubrey commands the private man-of-war Surprise, hired by the Royal Navy. Surprise has been recently refitted and supplied at Port Jackson, New South Wales, Australia, and departs for England during the year 1813. The British Empire is at war with Napoleon's France and France's ally the United States of America. Aubrey has a long history of successful military operations. Also aboard ship is Aubrey's close friend and confidant Stephen Maturin, the ship's surgeon and naturalist extraordinaire. Maturin is also an agent in the Royal Navy's intelligence network. The two men have known each other for years and have sailed with each other through many difficult commissions. Maturin is joined by another friend and associate, the Reverend Nathaniel Martin, who acts as the surgeon's assistant.

A few days out of Port Jackson Aubrey discovers a stowaway—a young woman named Clarissa Harvill who has escaped the penal colony near Port Jackson with the assistance of Midshipman William Oakes. An angry Aubrey declares he will maroon the two young lovers on the forbidding Norfolk Island. After a good night's sleep, Aubrey's temper cools, and when HMS Éclair appears and gives chase, Aubrey assumes the cutter has come to recover the stowaway prisoner, and he seeks to evade the ship. As it becomes apparent that Éclair cannot be avoided, Clarissa agrees to marry Oakes, an act that makes her a free woman. Martin performs the ceremony for Clarissa who wears a scarlet silk dress made from the only elegant material aboard. As it turns out Éclair is not in pursuit of escaped felons but instead delivers new orders for Surprise. Thus, Aubrey makes course for the distant island of Moahu to assist English whalers who are being persecuted by a French-crewed American-flagged privateer.

As the weeks and months go by Clarissa proves to be agreeable to sexual advances from many of the crew. Two of the mates and some other sailors become jealous of her sexual attentions, even as Oakes rails against his new wife's infidelity. Aubrey, Maturin, and Martin all resist but all secretly burn with sexual desire. The crew thus becomes divided into various factions and tensions mount. At the end of this period Maturin learns that Clarissa's previous life consisted of sexual abuse as a child and then years of prostitution as a child and poverty-stricken young woman. She had been transported for murder, and she proves an extraordinarily complicated personality. As Aubrey strives to maintain control aboard a divided ship, Martin deliberately distances himself from the woman, and Maturin struggles to understand her.

Surprise finally reaches Moahu, and after a brief battle ashore British interests are established and the French are driven out. During the action Surprise captures Truelove, a fur-trading ship packed with valuable cargo. Aubrey at once sees the solution to his problem and appoints the reliable Oakes commander of Truelove, sending him away with his wife to the nearest British port where the prize will be condemned and sold. The novel thus ends with Surprise recovering from a divisive period but looking forward to a brighter future.

The Truelove from BookRags. (c)2022 BookRags, Inc. All rights reserved.