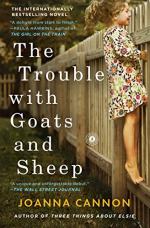 The Trouble With Goats and Sheep Summary & Study Guide

Joanna Cannon
This Study Guide consists of approximately 50 pages of chapter summaries, quotes, character analysis, themes, and more - everything you need to sharpen your knowledge of The Trouble With Goats and Sheep.

The Trouble With Goats and Sheep Summary & Study Guide Description

The Trouble With Goats and Sheep Summary & Study Guide includes comprehensive information and analysis to help you understand the book. This study guide contains the following sections:

This detailed literature summary also contains Quotes and a Free Quiz on The Trouble With Goats and Sheep by Joanna Cannon.

The following version of this book was used to create this guide: Cannon, Joanna. The Trouble with Goats and Sheep: A Novel. New York: Scribner, 2015.

The novel opens with the disappearance of a neighbor, Mrs. Creasy, on The Avenue. This disappearance is discussed in the Bennetts’ house and handled in a sardonic manner when Mr. Bennett sees Mr. Creasy looking about his property. Grace, the young daughter of Sylvia and Derek Bennett, assumes Mrs. Creasy has been murdered. On the way to school, Grace and her best friend, Tilly, discuss this possibility.

When nearly a week passes and Mrs. Creasy has not returned, it plunges the neighborhood into speculation and Grace into an existential crisis. Grace now wonders why people disappear, why people have to die, and whether or not disappearance and death are the same thing. When she asks the local clergyman why some people disappear, he responds that some people stray from the path. Poised to ask about death, she finds the vicar has already walked away, leaving her with questions. She then begins to ask her neighborhood if they believe in God. The first person she asks is Mrs. Morton, an older woman who often takes care of Grace, but she dismisses it as a silly and foolish question. Grace decides to spend her summer holiday finding God and the missing Mrs. Creasy with the help of her friend, Tilly.

Mrs. Creasy’s disappearance is the cause of much gossip; first, because the neighborhood is prone to discussing scandals; and, second, Mrs. Creasy, a kind and easy-to-talk-to woman, was the holder of many of the residents’ secrets. Many worry that she will expose them, and many of the conversations on The Avenue now revolve around trying to solve this problem. Over the course of the novel, many individual secrets are revealed by the character’s conversations or thoughts. For example, Brian Roper’s illiteracy or Eric Lamb purposely overdosing his wife when she was in incredible pain and dying with cancer. While the former fills the individual characters with guilt and shame, none of the secrets are as overreaching as the 1967 fire then consumed a portion of Walter Bishop’s house and, most devastating, killed his elderly mother.

Walter Bishop, an ostracized member of the small community because of his eccentricities, is treated with harsh judgment and often disgust; for example, one member of the community, Sheila Dakin, calls him a pervert. It was speculated that, in 1967, Walter stole a baby and left it in the nearby park. This perceived transgression, coupled with his odd behaviors, cause the residents to discuss his removal from the neighborhood. One resident, Sylvia Bennett, suggests that if he did not have a home, he would have to leave. Another resident, Harold Forbes, suggests a fire. While Walter and his mother were supposed to be on holiday, a fire erupts at Number Eleven, Walter’s home. Clearly, the neighborhood is involved, but there are numerous suspects in the arson.

The tensions of the characters increase as the weeks pass by and Mrs. Creasy does not appear, nor does God. Grace’s search for God ends on a physical level when Tilly finds an image of Jesus in a creosote stain on a drainpipe. While not religiously finding God in her search, Grace does find self-awareness as she matures, especially in realizing her selfish ways and how she takes others for granted. At the end of the novel, the allegations against Walter end up being false; Mrs. Morton was the one who took the baby on a stroll without asking her mother, Sylvia, first; then she lied and said she found the younger Grace in the park. Mrs. Creasy returns to the neighborhood, but not before discussing what was revealed to her about the fire with police. The culprit of the fire ends up being Mrs. Forbes, who, in righteous indignation, took it upon herself to rid the neighborhood of evil, but instead, created it.

More summaries and resources for teaching or studying The Trouble With Goats and Sheep.

The Trouble With Goats and Sheep from BookRags. (c)2022 BookRags, Inc. All rights reserved.