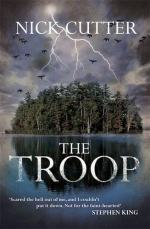 Get The Troop from Amazon.com
View the Study Pack
Study Guide
Order our The Troop Study Guide

Nick Cutter
This Study Guide consists of approximately 42 pages of chapter summaries, quotes, character analysis, themes, and more - everything you need to sharpen your knowledge of The Troop.

The Troop Summary & Study Guide includes comprehensive information and analysis to help you understand the book. This study guide contains the following sections:

This detailed literature summary also contains Quotes and a Free Quiz on The Troop by Nick Cutter.

“The Troop” is a horror novel by Nick Cutter which follows the efforts of Scoutmaster and doctor Tim Riggs and his scout troop to survive a viral infestation of genetically engineered intestinal hydatid worms. When the novel begins, Tim brings the five boys of Troop 52, all from the nearby town of Lower Montague, Prince Edward Island, Canada, to Falstaff Island for a weekend camping trip. The five 14 year-old boys include Kent, one of the most popular boys at school; Ephraim and Max, easy-going and well-liked kids; Newton, a nerdy kid; and Shelley, described as an odd duck. They settle down into the lone cabin on the island.

On the first night of the trip, Tim hears a motorboat arrive on shore. A short time later, he sees a very thin, very pale man approach the cabin. The man says he is starving. No matter how much he eats, he can’t eat enough. Tim fears for the safety of the boys but also knows he has a duty as a doctor to help the thin man. He brings the thin man inside and sets him up on the couch, but tells the boys to stay in their bunkroom. The thin man coughs up slime on Tim, who wipes it away. He knows the man needs serious medical help, but his attempts to radio the mainland are stopped by the thin man who smashes the radio. This unnerves Tim, who orders the thin man to the couch. Tim stays up most of the night to keep an eye on the thin man.

In the morning, the boys are all curious and unnerved. Kent thinks the thin man poses a threat. Tim sends the boys out on a nature hike while he remains behind to deal with the situation. When they return hours later, the thin man’s situation has not improved. Tim discovers the source of the man’s problem seems to be his stomach, so he decides to perform surgery using tools in the cabin to try to help the man. He has Max assist him since Max knows taxidermy, but gives Max a mask of gauze and rubbing alcohol to breathe through. Tim cuts the man’s stomach open to discover a massive worm come slithering out. It attempts to attack Tim, but Tim cuts it in half as he and Max run outside. Kent insists on seeing the worm, and rushes into the cabin with the other boys. Only Shelley is not shocked by the bloody scene. Tim begins feeling hungry and dizzy, leading Kent to realize Tim is infected. He and the other boys grab Tim and lock him in the closet. Shelley finds this hysterical.

The boys camp out around a fire outside. The next morning, they learn their cooler is gone. Shelley reveals that Kent went off with it and consumed everything inside. They all realize that Kent has become infected as a storm comes on. At first, the boys refuse to let Kent into the cellar where they have taken shelter, but then relent, making him sleep in the corner. A tree collapses on the cabin during the storm, killing Tim. While the other three boys head out for food, Shelley decides to have fun. He has long enjoyed torturing and killing small creatures, including his own pet cat, and now decides to kill Kent. As he prepares for this, he radios in to Ephraim, telling Ephraim he must be infected. He gets into Ephraim’s mind, convinced Ephraim the only way to save himself is to use his knife to cut his body open to find the worm before it is too late. Shelley drowns Kent, but as Kent dies, thousands of tiny worms flood out from his body and attack Shelley. Shelley now realizes he is infected. When Max and Newt return with a nearly-dead Ephraim, Shelley lights him on fire. Max and Newt chase Shelley into the woods.

Max and Newt realize that Shelley has the spark plugs for the boat. They track him down to a cave where Shelley attacks Newt, with Shelley’s stomach contents of half-rotted organs, slime, and worms explode on Newt’s lower half. Newt realizes he is now infested as well. Max refuses to let Newt give up. The two of them motor out from the island, only to be stopped by the Canadian Navy. Newt admits to being starving, and is shot in the head. Max is kept in isolation for months until he is judged to be clean and safe, and released to his parents.

Max learns that the thin man was a test subject for Dr. Edgerton, who under funding from a Canadian military contractor, was developing a biological weapon using the worms. It is revealed the thin man’s escape to Falstaff Island was planned and covered by the Canadian Navy as a controlled test. Edgerton is jailed for his part in things, but the fate of others involved in the experiment is unknown. As the novel ends, Max realizes he will never again be treated the same by even his own parents, all of whom keep their distance from him. Max heads out by boat at night to return to the island, feeling an emptiness, an “unnamed hunger” within him.

More summaries and resources for teaching or studying The Troop.

The Troop from BookRags. (c)2022 BookRags, Inc. All rights reserved.