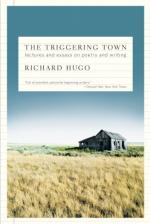 The Triggering Town: Lectures and Essays on Poetry and Writing Summary & Study Guide

Richard Hugo
This Study Guide consists of approximately 19 pages of chapter summaries, quotes, character analysis, themes, and more - everything you need to sharpen your knowledge of The Triggering Town.

The Triggering Town: Lectures and Essays on Poetry and Writing Summary & Study Guide includes comprehensive information and analysis to help you understand the book. This study guide contains the following sections:

This detailed literature summary also contains Topics for Discussion and a Free Quiz on The Triggering Town: Lectures and Essays on Poetry and Writing by Richard Hugo.

"The Triggering Town" is written by Richard Hugo with the intent of helping aspiring poets develop their own style of writing. In the course of the book Hugo shares with his readers some of his own personal writing techniques as well as some of the basic fundamentals of writing. Hugo also writes about Thomas Reothke, the poetry teacher who most influenced both his writing and teaching. The point Hugo hopes to convey to his readers most strongly is that he cannot teach any student to write. The only way to learn to write, Hugo stresses in his book, is for students to practice writing and develop their own personal technique.

Hugo starts his book by teaching students not to feel bound by their subject. He writes that although a poet may feel inspired by a particular idea, they shouldn't feel as if they have to write about the subject throughout their entire poem. Also in connection with writing, Hugo encourages his students to locate what he calls a triggering town. This town should be somewhat like the poet's hometown. It cannot be the poet's hometown, however, because this town holds too many personal memories and emotions for the poet.

Next, Hugo provides a list of assumptions he makes about the triggering town of each poem he writes. Interestingly these assumptions are often contradictory. From these assumptions Hugo moves on the discuss Roethke, his most influential writing teacher. After writing about Roethke's influence as both a teacher and a writer, Hugo shares basics of writing with his readers. These basics begin with which writing utensils a poet should use. Hugo also addresses more complex subjects such as how many syllables each line of a poem should include to make it most profound.

Hugo also includes in his book information in defense of creative writing classes. In this section Hugo explains why he believes creative writing classes are becoming so popular and also why so many literature professors look down on such classes. In his chapter "Statements of Faith" Hugo writes about the personality of the poet as well as the way the poet's lack of self acceptance helps them to create poetry.

In the next to last chapter Hugo talks about his experiences as a bombardier in Italy in World War II. He describes through his stories how he used these experiences to create poetry. Finally, Hugo discusses the differences between the poet in "real life" job settings and the one who works in the university.

More summaries and resources for teaching or studying The Triggering Town: Lectures and Essays on Poetry and Writing.

The Triggering Town: Lectures and Essays on Poetry and Writing from BookRags. (c)2022 BookRags, Inc. All rights reserved.