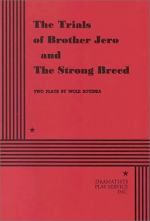 Related Topics
Ak: The Years of Childhood
Death and the King's Horsemen
Wole Soyinka
Trials of Brother Jero
The Lion and the Jewel

Wole Soyinka
This Study Guide consists of approximately 46 pages of chapter summaries, quotes, character analysis, themes, and more - everything you need to sharpen your knowledge of The Trials of Brother Jero and The Strong Breed.

The Trials of Brother Jero and The Strong Breed Summary & Study Guide includes comprehensive information and analysis to help you understand the book. This study guide contains the following sections:

This detailed literature summary also contains Quotes and a Free Quiz on The Trials of Brother Jero and The Strong Breed by Wole Soyinka.

The following version of this book was used to create this study guide: Soyinka, Wole. Five Plays. Oxford University Press, 1964.

The Trials of Brother Jero and The Strong Breed are two plays by Wole Soyinka, a Nigerian playwright and poet. The Trials of Brother Jero was first performed in Ibadan, Nigeria, in 1960. The Strong Breed was first performed there in 1966. In The Trials of Brother Jero, Soyinka uses the overlapping lives of three main characters to explore themes such as corruption and abuse of power. These characters include a beach “divine” or holy person named Jeroboam (or “Jero," for short); Chume, Jeroboam’s assistant; and Amope, Chume’s wife. The action unfolds near a fishing village in southern Nigeria, over the course of a matter of days. The Trials of Brother Jero opens on a monologue delivered by Brother Jero, describing his work as a prophet. As he tells the audience, there is a rivalry amongst the different prophets on the beach. In order to distinguish himself, Jero betrays his old Master who, according to a brief flashback, Jero drove off his land. In response, Jero’s old Master cursed him, and warned Jero that eventually the “Daughters of Eve” will bring about his “downfall” (203). Jero tells the audience that, though he tried to avoid women, one day he woke up to a confrontation with his very own “Daughter of Eve” (203).

The second scene shifts to a conversation between a man named Chume riding on a bicycle and a woman named Amope riding on the handlebars. Amope tells Chume to stop the bicycle outside a particular hut. As she prepares to get off, Amope nags Chume for his low-ranking job as a Chief Messenger in the Local Government Office. After Chume leaves, Amope sits outside the hut, which belongs to Brother Jero. Jero owes Amope one pound, eight shillings and ninepence that he borrowed for a velvet cape. Amope demands her money back, but Jero prevaricates. A female trader selling smoked fish enters the scene. While Amope is haggling with the woman, Jero flees the hut.

The scene shifts again to the beach, where Jero is preaching to his congregation. Jero comments on a young girl who goes swimming everyday in the ocean. Jero also thinks to himself that he cannot allow his assistant Chume to beat his wife, because he believes he must keep his followers in a state of perpetual dissatisfaction. Chume enters, prays with Jero, then asks for permission to beat his wife. Jero forbids him from doing so, then runs off after a woman. Chume stays with the congregation, and leads the service himself. When Jero returns, he is bruised and bloody. He sends the worshippers away, and in a conversation with Chume, realizes that Chume’s wife is the same woman who lent him money. After his realization, Jero encourages Chume to beat his wife, thus reversing his earlier position.

In the fourth scene, outside Jero’s hut, Amope is criticizing Chume in her usual way. Chume tells her to pack her belongings, ordering her to keep quiet. When Chume threatens to beat her, Amope runs to Jero’s door to beg for help. Jero does not answer. When Amope finally begs Jero by name, Chume makes the connection between Brother Jero, who told him to beat his wife, and this man who owes his wife money. The scene then cuts to Jero, who is listening to a speech from a well-dressed Member of the Federal Government. Jero targets the man for his congregation, promising him future job promotions. Eventually, the Minister is kneeling at Jero’s feet when Chume rushes onto the stage, wielding a cutlass, and chases him off the beach. Chume chases Jero off the beach, and when he is gone, the Minister believes that the prophet’s disappearance is a sign of his genuinely divine power. Having escaped Chume and gained a new convert, Jero addresses the audience. Jero picks up and throws a pebble, thinking that another day has passed in which he has successfully evaded the “Daughters of Eve.”

In The Strong Breed, Soyinka writes about the themes of social inclusion and exclusion in another small village in Nigeria. The play opens on a scene between Sunma, a local woman, and Eman, a young schoolteacher from another village. Sunma is anxious for Eman to leave the town. Eman ignores her and instead plays with Ifada, the village idiot. Sunma harshly sends the boy away. At this point, a person identified only as “The Girl” enters the scene, dragging behind her an effigy of a human being. The Girl explains the she is sick and the effigy will cure her. Again, Sunma harshly sends the girl away, saying she is “evil.” The Girl and Ifada fight, then exit the stage together.

Sunma again tells Eman that the villagers are evil, and that he should leave. Sunma wonders whether Eman has had some problem with a woman in the past, and immediately asks for forgiveness when she realizes her offense. Sunma then alludes to a festival, telling Eman that they must remain in the house until the festival is over. The Girl and Ifada reappear outside, and two men capture Ifada. Sunma and Eman do not notice.

Later, Sunma notices the abandoned effigy and tells Eman not to touch it. Sunma and Eman again fight over Eman’s decision to stay in the village, and Sunma accuses Eman of lovelessness. They are interrupted, however, by the sight of Ifada pounding at Eman’s door. When Eman lets Ifada into the room, five men appear in pursuit of him. One of the men is Jaguna, Sunma’s father. The men demand that Ifada be returned, and explain that Ifada has been chosen as the village carrier. When Eman protests on the basis of his own village’s purification rituals, one of the men named Oroge explains that only an outsider can be village carrier. Jaguna challenges Eman to volunteer as village carrier in Ifada’s place.

After the play’s only extended blackout, Ifada and the Girl fight over the effigy. Sunma suddenly realizes that if Ifada is back to the house, then Eman has turned himself over to the village men. The next scene shows the men chasing a half-naked Eman. It is revealed that after Eman volunteered as carrier, he was undressed, prepared, beaten but ran off before the end of the ritual. As he flees, Eman encounters an Old Man and his attendant. It becomes clear that this Old Man is Eman’s father, and that the men in their family are what is called a “strong breed.” They have the responsibility to act as carriers for their village. After the death of his wife in childbirth, Eman refuses to take on this responsibility. The ritual then begins, with two men placing a model boat on the Old Man’s head and following him as he runs off stage.

The play then jumps back to the present moment, as Eman crouches in the bushes. His pursuers squabble amongst themselves, claiming that Eman’s escape has contaminated the entire village. Eman has a second flashback to the time when a young girl named Omae, who eventually became his wife, is mocking him for being uncircumcised. Suddenly, a man named the Tutor appears and tries to convince Omae to go back to his house to, euphemistically, “wash clothes” together. Eman defends Omae, and promises her that he will go to the city and make a living so that he can support them both.

Back in the present moment, the Girl asks Eman if he is thirsty. The Girl betrays him, however, and goes to fetch the men instead of a glass of water. Eman has a third memory, this time of him, a Priest, and the Old Man standing beside Omae’s gravesite. Back in the present moment, Eman kneels by the grave and watches as Jaguna and Oroge approach. To the imagined presence of his father, Eman asks for the direction of the stream, and his father tells him to go elsewhere.

The Strong Breed then cuts to Sunma and Ifada’s discovery of the effigy, hanging from the roof of Eman’s house. Eman has been hung. Jaguna and Oroge are disappointed by the villagers’ reactions. They claim not to have received any benefit from Eman’s sacrifice. Sunma, Ifada and the Girl are silent.

More summaries and resources for teaching or studying The Trials of Brother Jero and The Strong Breed.

The Trials of Brother Jero and The Strong Breed from BookRags. (c)2022 BookRags, Inc. All rights reserved.